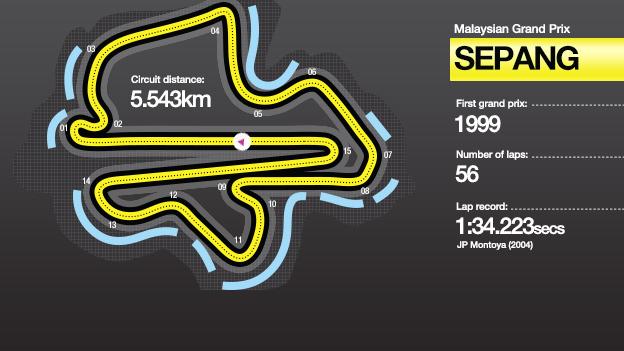 It is advantage Kimi Raikkonen after round one of the 2013 Formula 1 season with the Lotus driver winning in Australia on Sunday, but most drivers will tell you that a clearer picture of the title contenders will likely be painted at this weekend's Malaysian Grand Prix.

As ever though, the unpredictable conditions are capable of throwing a proverbial spanner in the works. Dry one second, torrential rain the next, teams and drivers alike will be keeping an eye on the skies as they plot a successful race weekend.

240.9 - is the average rainfall, in millimetres, during March. The month when the Malaysian Grand Prix is held

The 5.543km Sepang International Circuit was the first to be designed by the renowned Hermann Tilke, whose portfolio now boasts eight of the 19 races on the 2013 calendar.

In its 15th year as part of the Formula 1 world championship, the track is popular among the drivers because of the variety of corners around the lap.

There are overtaking opportunities, with the best being at Turn One and 15 - the starting points for the two longest straights, which are also where the two DRS zones are located.

Hot and dry with the ever-looming threat of a monsoon, drivers, engineers and journalists turn up at the Sepang International Circuit on each day of the race weekend never quite knowing what to expect.

The track itself, located a short distance from Kuala Lumpur airport but 60km from the city itself, is built on the site of a former oil palm plantation and the canopies above the grandstands are a nod to this, while also mirroring the 5,000 palm trees -planted to replace those that were lost - that surround the circuit.

Lotus driver Kimi Raikkonen: "Malaysia has been good and bad for me in the past; I've had a few bad races there but I've also won twice at the circuit including my first Grand Prix victory so it's nice to go back to where it all began with my first win (in 2003). I would not say that circuit is more important for me - it's not that special for me - but it's quite a nice place to race at. I like it and the challenge is always at the highest level in the beginning of the year in the heat."

Red Bull driver Sebastian Vettel: "It's a very rewarding circuit for a driver to win, as it's such a tough challenge with the heat and high-speed corners. It's rewarding, as it shows you have prepared well over the winter, so I guess my favourite memories are winning in 2010 and 2011. My tip for keeping cool in Malaysia? Don't stress, because you can't run away from the heat…"

"Malaysia ushered in what has come to be the sport's new era - governments, mostly Asian, using F1 to mark out their countries as open for business and tourism in the modern world. And the first of what might be called the new generation of Formula 1 circuits - it made its debut as long ago as 1999 - is among the very best. Sepang was designed, like all the new tracks, by Hermann Tilke, F1's in-house architect, and he did a grand job, with a challenging combination of long straights and slow corners, for good racing, and challenging, medium and high-speed corners to test the drivers' skills. That test is made all the harder by the suffocating heat and humidity, which make this probably the toughest race on the calendar after Singapore - only a couple of hundred miles south at the bottom of the Malay peninsula. And now the race has been moved later in the day to suit European television times, rain is always a threat."

McLaren driver Sergio Perez: "Sepang holds many happy memories - I had one of the best races of my career there last year where I was able to push Fernando Alonso for victory until the closing laps. It's a fantastic circuit, really fast and demanding. It would be great to pull off another unexpected result for the team this year."

Marussia driver Max Chilton: "Sepang is a track I know well and have raced at a few times so, to some extent, that helps in getting up to speed much more quickly and being able to focus on car set-up instead. After such a positive start to the season and an obviously competitive car, I can't wait for the next opportunity to drive it this weekend."

Sauber driver Nico Hulkenberg: "Compared to Melbourne, the track in Malaysia has different characteristics. It's a fast track with long high-speed corners, which should suit our car well. For the drivers Malaysia is always a challenge because of the high temperatures and the humidity. Lastly there is always a chance of rain, especially at the start of the race."

There have been a few, but one of the most memorable has to be the 2001 Malaysian Grand Prix. What had looked as if it would be a straightforward romp to victory for Ferrari's Michael Schumacher was turned into a classic by an early monsoon downpour and saw a display of stunning driving by the German, who went from a disastrous start to domination.

Schumacher and team-mate Rubens Barrichello were the early pacesetters, but as rain started to fall on lap three they slid off the track in tandem while going through a quick right-hander and both were lucky to make it back to the pits. By the time they did, the rain was bucketing it down, as it so often can in Malaysia, and this was where Ferrari made the decision that won them the race.

Both cars were fitted with intermediate tyres while in contrast most of the other leading runners chose full wets. The circuit was well and truly soaked, and initially Ferrari's decision looked as if it might backfire. But the safety car was sent out to control the race until the rain had abated, which meant conditions were perfect for the lighter-treaded intermediates by the time it pulled in.

Schumacher was 10th at the restart with Barrichello 11th, but both men proceeded to cut through the field like a knife through butter, with Schumacher winning ahead of his teammate.