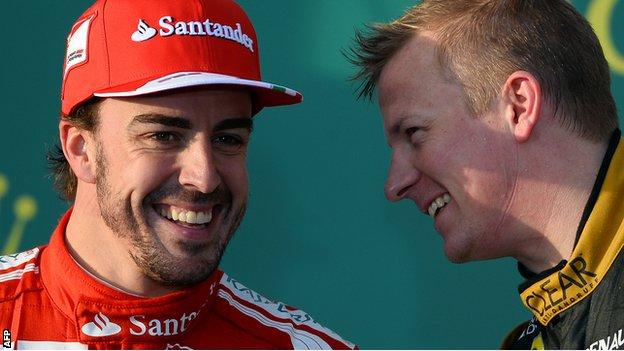 The Australian Grand Prix was a confusing weekend in terms of trying to understand the real competitive order in Formula 1.

The mixed weather meant there was no clean run into qualifying - in fact the only dry qualifying laps were at the very end of the top-10 shoot-out.

And when there are varying strategies, as there were in Melbourne, race results are not necessarily a reflection of absolute pace either.

So I have spent some time doing a bit of number crunching to try to understand which teams are genuinely competitive, and who lucked into a good result.

It is always difficult to really understand what happened when there is a difference in pit strategy.

So to try to dig down into the truth, I have removed the pit stops themselves from the equation, leaving just the laps driven out on the circuit.

To do this I have taken the in-lap as the same time as the previous lap and the out-lap as the first timed lap after the stop.

This eliminates any real difference in strategy and any problems during the stop itself and gives a truer picture of the real race pace of each car and driver.

I have also altered another couple of parameters:

I've removed the grid offset - so, in other words, all the cars started the race from the same grid position.

And I have removed the last two laps, as this can skew the result because different drivers back off to different levels depending on track position relative to other cars.

The first thing to strike you is that the calculation produces a different winner - Ferrari's Fernando Alonso rather than Lotus's Kimi Raikkonen.

This might suggest that Raikkonen won only because he did a two-stop strategy compared to Alonso's three.

But there are a couple of reasons to believe this is not the case, and that Raikkonen would have won no matter what.

First of all, the winning margin given to Alonso by the calculation is quite small at 6.175 seconds. Averaged over my modified 56-lap race that equates to just 0.11secs per lap.

Doing one more stop would have meant that Alonso could abuse his tyres more, so the difference in pace should really be bigger than it is when you consider the tyre degradation that Raikkonen should have suffered with his two-stop strategy.

Put that all together and it suggests a) that the Lotus is very kind to its tyres; b) that we have not seen its true race pace yet; and therefore c) it was almost certainly the fastest race car in Melbourne.

The big shock was perhaps the lack of pace of the Red Bull in the race, considering its superiority in practice and qualifying.

Red Bull struggled on race day and their car - particularly Vettel's - was probably as aggressive on the tyres as any car out there.

They certainly have a car for qualifying but it looks as if they may just have to give a little bit of that away to help them on Sunday afternoon, which after all is when the points are handed out.

Analysing the race like this does not make any better reading for McLaren.

They were just not fast enough and if you actually take into account some of their strategy calls there is even more to be concerned about.

For example, they put Sergio Perez on super-soft tyres for his second stint when they should have saved them for the final stint.

There are two reasons for that:

1) That's when the car is at its lightest, and therefore able to keep the fragile softest tyre alive for longest.

2) It was a very overcast day and if it had rained it would have meant they did not need to use them at all - a good idea when they were as weak a race tyre as they turned out to be in Melbourne.

The numbers make two other things obvious - Force India benefited strongly from their two-stop strategy; and Jean-Eric Vergne and Toro Rosso will also be in the mix when they get their act together in qualifying.

Malaysia this weekend will provide another snapshot - and after that race I will look at this again to try to uncover some more hidden secrets.

It looks as if it is going to be a very competitive season so it will be fascinating to see who comes out on top of the pile this weekend.