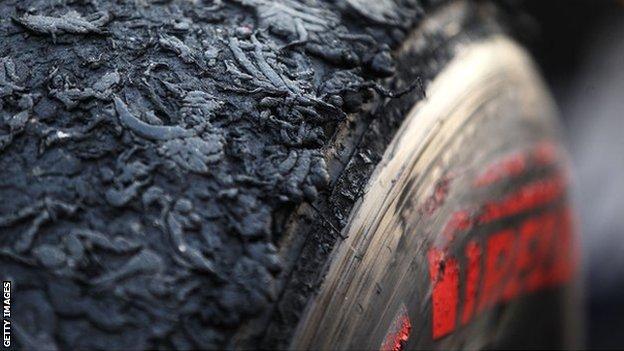 Notwithstanding Kimi Raikkonen's excellent win for Lotus, the stand-out story of the Australian Grand Prix weekend was just how much trouble McLaren are in.

It's a tricky situation for them. They have pushed the boundaries on the car with lots of changes from last year - the high chassis, and changes to the front brake-duct, rear suspension and coke-bottle shape are all in my book pretty positive.

But all that does is create potential. They then have to exploit to the maximum the avenues they have opened and they clearly have not done that yet.

They also seem not to know what is wrong.

Aerodynamics are what make a Formula 1 car perform so we have to assume that is where the problem lies. Aerodynamics should be easy to assess in a simulator.

In the wind tunnel, teams run the car in roll, yaw, with steering angle and various sets of ride-heights and create a set of what are known as aero maps - a three-dimensional aerodynamic production of the car for all the different parameters.

They apply that to the simulator, which is easy to do, and the driver gets in and drives it, and depending on what he discovers the aero map can be adjusted to change the behaviour of the car.

Developments that work well are kept; those that don't aren't. So the question is, how have McLaren got it so badly wrong for the car to be more than two seconds off the pace?

They should not be in this position given their quality as a team.

McLaren have to go back and look at why the package they have is not functioning better.

I would be looking at the front-wing assembly, where I think they have taken a detrimental step.

They have gone to a three-element front wing. But because that has large-section elements, it means when the wing stalls, such as during braking or in high-speed corners, there is a bigger percentage stall. That gives inconsistent balance.

McLaren also have a very aggressive coke-bottle shape at the rear. You have to be very careful with that because while it will produce more overall downforce in optimum conditions, it is very easy for the airflow to separate when the car is in yaw mid-corner.

That means the car loses downforce because instead of the coke-bottle being able to drag the airflow over the top of the floor and make the floor work more efficiently, one side gives up and the airflow goes under the floor.

I suspect that there are parts on the car that are a big gamble and they have not got them right, basically.

Tyre usage will be key

The tyre situation has not really changed from last year, if you look at the Australian Grand Prix closely.

The super-softs were a bold move for Albert Park - so I think we need to see another race where the track temperatures are more consistent.

But everyone had the same opportunity and Raikkonen and Lotus were able to look at their car's strengths and exploit them to the maximum. Everyone else could have done that but didn't.

The Lotus is good on its tyres but still quick. The Red Bull is quick but it didn't do the tyres much good; they were the first to pit. And the Ferrari is sort of in the middle.

Mercedes probably need to look at their strategy again.

They were aiming for a two-stop but there was a time in the first stint when they were still out on the super-softs but losing a lot of time and they didn't do anything about it.

Then, in the second half of the race, Lewis Hamilton managed only a short stint on the medium tyres and had to make a third stop, and it seems odd that those tyres went off so quickly.

I think the general picture will remain the same but the teams will move around as the temperature comes up.

Lotus and Raikkonen won this race. They weren't gifted it, which they were in Abu Dhabi last year when Lewis Hamilton retired. This time, everyone was still in there scrapping and Raikkonen beat them.

Lotus also had good tyre durability last year but they lacked a bit of pace. This year, they have kept the good durability and have improved the pace. So they will be real contenders.

While McLaren's problems attracted a lot of attention, Williams were also clearly struggling.

Williams were pretty competitive for most of last year - regular top 10 qualifiers and they even won a race.

But in pre-season testing, it was clear the drivers could not commit to the corners. That's usually an indication of a lack of grip.

Coming to the first race with two different exhaust/sidepod configurations is obviously a questionable decision. That's a big change, there is only so much time over a race weekend, and even less when the conditions are mixed like they were in Melbourne.

"Raikkonen finished third in the championship last year, and this year the Lotus car seems to be in better shape in terms of ultimate performance while also maintaining its strong point of being kind to the tyres."

The difference between the two systems is that it is much more complicated to make the new version, which is basically a copy of Red Bull's, work.

Red Bull showed that last year - it took them two-thirds of a season to nail their design, which relies on the low-pressure area at the rear to work a duct in the floor consistently.

The idea is to get air into the central part of the diffuser and as a result make that work the coke-bottle/floor harder and stopping the airflow seeping under the floor. But it is very difficult to get it right.

Sometimes you can be guilty of trying too hard, but then the car does not look anything special with the original exhaust design on it either.

Red Bull are fast but vulnerable

Red Bull were unable to convert their stunning practice and qualifying pace into a victory, but there is no doubt the car is the quickest out there.

They appear to have a car that has bucketloads of downforce and good balance that is very driveable and consistent. That means they can play with little design features and make it better.

Despite Raikkonen's impressive victory in the race, Red Bull look like they will be difficult to beat this season.

But I still think they should look at the way they run the car because Australia again proved they are vulnerable when they cannot run cleanly at the front.

The car's high tyre wear meant Vettel could not break free of the field. Then, when he lost the lead the car's high-downforce/low straight-line speed set-up meant he could not pass Adrian Sutil's Force India.

I've mentioned this before but I think they would be better served sacrificing a bit of downforce to ensure the car is more raceable.

Last year to this

Every year, I compile statistics detailing the relative performance of the cars, using the fastest lap time set over a weekend by each driver.

The fastest car gives you a baseline, from which you can compare the performance of the rest.

Everyone else has gone backwards to one degree or another - Marussia by 0.224%, Ferrari by 0.236%, then Force India, Toro Rosso, Caterham, Sauber and Williams. McLaren - who were the baseline last year - have lost the most at 2.602%.

These lap times also give a picture of the absolute performance of the cars and after Australia the competitive order is Red Bull, Mercedes, Lotus, Ferrari, Force India, Toro Rosso, Sauber, McLaren, Williams, Marussia and Caterham. Tyre usage then alters that in the race.

It's far from a definitive list at this stage because it's based only on one race weekend in mixed wet/dry conditions, but it's the first clue.