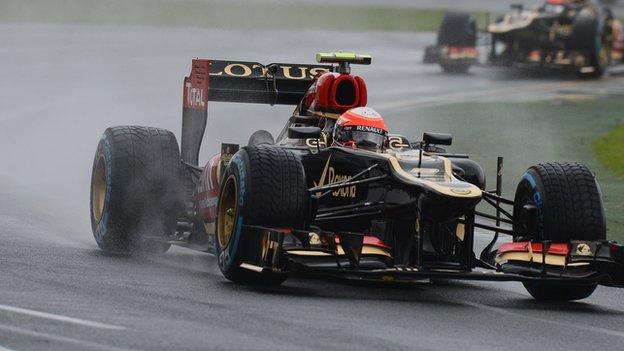 Teams managed only a few laps of running and the track was soaked before they had a chance to prepare for qualifying, which starts at 0600 GMT.

Lotus, Red Bull, Mercedes and hopefully Ferrari are in the leading group

World champion Sebastian Vettel pulled off the track with a car problem.

Over the team radio, Vettel was told by his engineer to pull off because the car had lost its hydraulics. But team boss Christian Horner later said it was a malfunctioning sensor that had given a false reading.

In the short period of dry running, Lotus driver Kimi Raikkonen was fifth fastest, ahead of the Toro Rossos of Daniel Ricciardo and Jean-Eric Vergne.

Force India's Adrian Sutil - back in F1 after a year out of the sport following a conviction for grievous bodily harm - was eighth, with the Sauber drivers Nico Hulkenberg and Esteban Gutierrez completing the top 10, ahead of Mercedes driver Nico Rosberg, Vettel and the second Red Bull of Mark Webber.

Lewis Hamilton did not complete a flying lap in the dry after his team encountered a couple of delays turning the car around after his installation lap and was 22nd and last.

Vettel looked in imperious form in Friday practice, half a second clear of the field and with at least that much pace still in the car.

But he was only 12th fastest in the dry running on Saturday morning and managed only a handful of laps before his problem during the later wet running.

The rain stopped and the track dried towards the end of the session, with a dry racing line beginning to emerge, but none of the drivers went out on 'slick' dry-weather tyres.

Rain is predicted to return for qualifying, which would prevent the teams seeing the picture of true competitive form all have been waiting for this weekend to reveal.

Alonso told BBC Sport he thought four teams were likely to be competing at the front.

"Lotus, Red Bull, Mercedes and hopefully Ferrari are in the leading group," Alonso said. "We need to define this group and then see who is the main rival, whether it be Webber, Vettel, Hamilton or whoever."

McLaren are struggling for pace after admitting they do not understand what is wrong with their car.

Button said on Friday that the team might even find it difficult to get beyond the first knock-out part of qualifying.