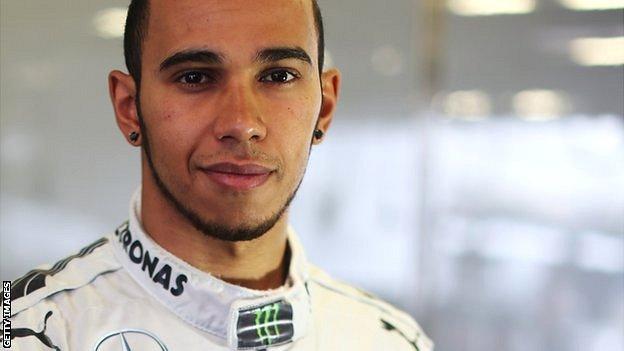 Lewis Hamilton is to join BBC Sport as a columnist this season, starting on Friday.

The 2008 world champion, who drives for Mercedes in 2013, will write for the BBC Sport website on the Friday before every grand prix this year.

The column, Hamilton's first as a Formula 1 driver, is a key part of a revised online offering this season.

This will include a post-race column from co-commentator David Coulthard - who won 13 grands prix during his career driving for Williams, McLaren and Red Bull - as well as videos from new BBC F1 presenter Suzi Perry that will take us behind the scenes of Formula 1.

Live grands prix on the BBC

BBC Sport will be asking users to send in questions to the former Jordan, Stewart and Jaguar technical director - who has an expanded role across TV, radio and online - via Twitter using the hashtag #askAnderson.

Across the BBC, there will be approximately an additional 40 hours of network television output, with live race practice sessions generally shown on BBC Two and BBC HD.

BBC One and BBC One HD will show nine live races, including Canada, Britain and Brazil, with extended highlights of the remaining races.

Live grands prix will continue to be followed by the popular F1 Forum on the Red Button.

Radio 5 live and the BBC Sport website will broadcast audio commentary of every grand prix live, while 5 live Formula 1 - on Thursday nights ahead of each grand prix - will feature guests, interviews and insight ahead of the weekend.

On top of the simulcast of the live TV and radio output, the BBC Sport website will also include the 'driver tracker', on-board cameras and a pit-lane streams at live races.

The website will also broadcast live text commentary of every session at every race throughout the year, alongside the usual mix of ground-breaking news stories, features, analysis and comment.

Legendary F1 commentator Murray Walker will be providing a series of archive-based videos and written articles for every race of the season.

'Murray's Memories' are his personal recollections of some of the greatest moments in the history of F1.

Coverage of the F1 season is now available on our new BBC Sport smartphone app, available for iPhone and Android devices.

The app brings together BBC Sport's live and on-demand video coverage, along with news, features and stats.

Perry takes over from Jake Humphrey as television presenter.

F1 journalist and broadcaster Tom Clarkson joins the television presentation team as a pit-lane reporter alongside Lee McKenzie, who also presents Inside F1 on the News Channel on the Friday and Saturday of live race weekends, with the latest news and interviews from each grand prix.

On 5 live, James Allen and Jennie Gow continue as commentator and pit-lane reporter.