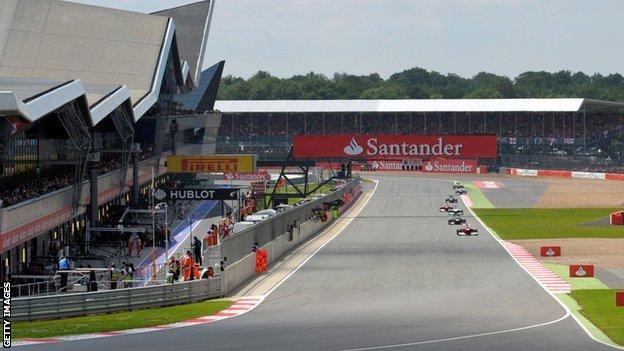 The British Grand Prix's cheapest race-day ticket is among the most expensive of its type on the Formula 1 calendar.

The 2013 season starts on Sunday in Melbourne, Australia - where the cheapest ticket costs £66, compared to £145 for Silverstone.

Only races in Brazil and Abu Dhabi are more expensive than Britain, while Malaysia is cheapest at £13.

Cheapest tickets to 2013 showpiece events in the UK

In contrast, a race-day ticket to the glamorous Monaco Grand Prix in Monte Carlo costs just £30.

It is also one of the most expensive tickets for showpiece sports events in the UK. The cheapest ticket to the Grand National is £21, the Open final day £65, Champions League final at Wembley £60 and first Ashes Test final day £20.

"It frustrates me when people compare the cost of a ticket to watch a 90-minute football match or 80-minute rugby match with a ticket for the British Grand Prix.

"For example, a ticket to watch Arsenal play a category 'A' game at The Emirates - one of 38, 90-minute league matches that they will play this season - can cost as much as £126.

"To come to Silverstone on the Sunday of the British Grand Prix - a World Championship event that only takes place once a year in the UK - tickets are available for £145 for a whole day of world-class entertainment, both on and off the track."

Phillips added that Silverstone is not influenced by prices of other races, but needs to make sure the event is commercially viable.

"When you combine ticket packages, entertainment packages, commercial agreements, government support - or lack of in Silverstone's case - attendance figures, crowd management and the number of days fans attend the event; no two grands prix experiences are the same," he said.

"While the overwhelming majority of venues around the world rely on government funding to cover all, or part of the fee to host Formula 1, the British Grand Prix remains one of the few privately funded events on the calendar.

"The future of the British Grand Prix is solely reliant on the BRDC [British Racing Drivers' Club] and Silverstone from a commercial point of view.

"Over the three days, the British Grand Prix attracts a bigger crowd than any other event on the F1 calendar, so the value is obviously appreciated by fans."

The prices for the cheapest and most expensive race-day and weekend tickets were available as of 4 March 2013. Each ticket offers a seat or a place on grassed banking and hospitality tickets were excluded.

Figures are for the 2013 season, however 2012 prices have been used for the Indian, Abu Dhabi and United States Grands Prix because they have yet to put tickets on sale.

The cheapest average race-day ticket costs £95 while the average three-day ticket will set you back £106.

The £30 ticket for Monaco gives you access to one of 10,300 spots on the hill overlooking a large part of the circuit. For an extra £17, you can have access to the track for Thursday practice and Saturday qualifying, with the ticket allowing you access to roving grandstand seats.

The Malaysian Grand Prix offers the cheapest ticket at £13 and gives you access to Friday practice, Saturday practice and qualifying and Sunday race day at Sepang.

The cheapest multiple-day ticket for the Japanese Grand Prix ranks fifth at £76 and gives access to the circuit from Thursday through to Monday.

The ticket gives access to the pit lane and autograph sessions on the Thursday and includes a five-day unlimited ride pass to their on-site 'Motopia' amusement park.

The Spanish Grand Prix is in the bottom half of the table at £104 for the cheapest weekend ticket, but it does include access to the two pre-season tests at the Circuit de Catalunya.

At Albert Park, Australian Grand Prix organisers put on four days of track action - more than any other - with practice sessions for the V8 Supercars starting on the Thursday.