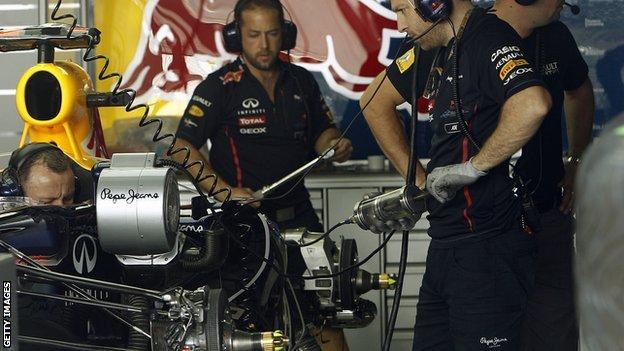 In the first three parts of our series about how to build a Formula 1 car, we looked at the three design stages - initial lay-up,major mechanical parts and aerodynamics. This week, we'll look at detail aerodynamic work and refining and improving an initial design.

Once the fundamental concept of a Formula 1 car has been defined, a team move on to refining the detail aerodynamics. This is incredibly important - it is what decides how well the car performs.

All the aerodynamic surfaces, from the front wing through the sidepods to the diffuser and rear wing, create some sort of force, either negative or positive. What a team are trying to do is increase the positives and reduce the negatives.

The front wing is the single most important part because it's the first thing that hits the air. So it defines the flow over the rest of the car to a significant degree

Take the top of the sidepods, for example. They create lift - like on an aeroplane. That is a force that counteracts the downforce the team are trying to create to give maximum cornering performance.

The designers want to minimise that lift - not least because not only is it creating lift, but anything that creates an aerodynamic force also creates drag. And you want as little drag as possible.

So the team will try to identify the lift-creating surfaces, such as the sidepod tops, and try to eliminate that by changing the direction of the airflow over them.

Small detail changes - on turning vanes on the front wing or underneath the nose of the car or on the top of the sidepods, for example - all make a difference to how big that force is.

Then there are the positive forces, whether it be downforce or managing the airflow in the direction you want it. The teams want to maximise these details and make sure the airflow is stable.

The designers want the downforce to stay with the car through a series of robust changes of airflow - when the driver is behind another car, or there's a crosswind, for example.

So when you're optimising the performance of an individual part, you don't want something that's really critical.

That allows for some turbulent flow getting to the part without that affecting the performance of the car too much.

As far as optimising the car itself goes, you start with the front wing. That's the single most important part because it's the first thing that hits the air. So it defines the flow over the rest of the car to a significant degree.

The team will get the front wing sorted out into a range where adjusting the flaps moves the centre of pressure - the virtual point on the car where the aerodynamic forces react, and which thus determines car behaviour - in the way they want it to.

You create the front wing so it's quite robust and then you set it at a mid-point of its range and go backwards through the car optimising all the other aerodynamic surfaces.

So you'd start with the turning vanes underneath the nose; then the vertical turning vanes at the leading edge of the sidepods and so on, trying different solutions and angles.

In the wind tunnel the team are looking at the numbers representing the forces being created when they try different versions of these parts. In computational fluid dynamics (CFD) programmes they look at how the flow is changing and try to understand why the different flow gives different forces on the model.

Then the designers will work from that to try to make the flow change a bit more and create better forces. They keep trying to optimise it.

The CFD is useful because with the wind tunnel you're basically looking at nothing; only the numbers it produces. CFD, by contrast, allows the engineers to model the flow, study it in more detail, see the different pressures, and from there it's easier to design better parts that will give more downforce.

So the team do that from the front to back of the car and try to optimise everything on the way, and then it's time to start at the front again, make that work a bit harder, and the process goes on and on and on.

DECIDING WHAT TO CONCENTRATE ON

Of course, all F1 cars do not look the same. They have different solutions to the same problems, and how well those are implemented defines the car's success and failure.

In 2012, for example, Red Bull were very obviously focused right from the start on claiming back as much as possible of the downforce that had been lost because of the ban on exhaust-blown diffusers.

Other teams were also working on this, but Red Bull design chief Adrian Newey had a very specific idea in his mind about how he was going to do it, which was different from the routes chosen by the other pioneers, McLaren and Ferrari.

It took him a while to get there, but perfecting this for the last third of the season was what won Sebastian Vettel a third world title.

HOW DOES A TEAM MAKE THOSE DECISIONS?

Each team divides its aerodynamic department into several sections. A group of five, six or seven guys will be front wing specialists, another group will focus on the diffuser, and so on.

Communication between those areas is critical - making sure everyone is aiming at the same result.

Take that key Red Bull development. It also featured a new front wing. Now, that front wing design had probably been around for quite a while. Other bits of the car would have been developed in conjunction with it, or at least checked to make sure they worked with it.

And different parts of the car work in different ways. The front wing is an overall downforce-producing device that helps the airflow over the rest of the car.

But the exhaust-pipe flow is specific to when the throttle is open and the car is coming off the corner. The idea is to make sure the centre of pressure goes in the right way so the driver has more grip when he wants to accelerate.

So parts have to work separately but they also have to work together. And where the team put the emphasis will depend on the decisions of the person in charge.

It's a bit like Lego building blocks - each has its individual purpose but they all have to fit together to make one overall shape. Except in the case of an F1 car, the blocks are changing on a regular basis.

If you don't get this right, things can go badly wrong.

I've heard one story - possibly apocryphal, but quite likely not - about one big team that had groups of people working on different areas and by the time one group had produced a new engine cover it didn't fit on to the underfloor because the underfloor had changed. The two groups hadn't been talking to each other.

That's why it's so important to have the right person in the middle of the engineering management who knows how it all fits together pulling the strings.