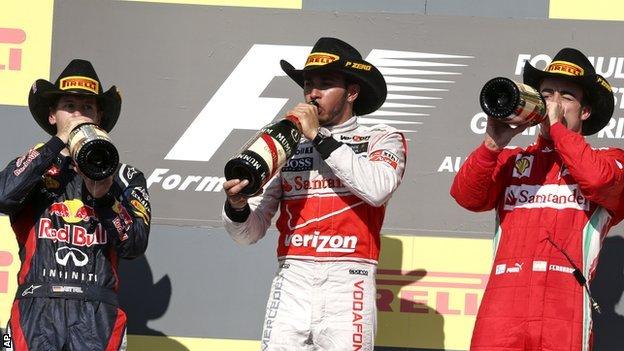 Ferrari say they would choose Sebastian Vettel over Lewis Hamilton if they needed to appoint a new lead driver.

But the Italian added that Vettel, 25, "would be very good for us".

"Between all the drivers, Vettel and Hamilton could be perfect for Ferrari in the future, with one difference - Vettel is younger," he said.

"First of all, of all the drivers, we have the best - in terms of speed, intelligence in the race, and a capability to work with the team.

"When you have the best driver you have to put him in the best condition to succeed, to win and have a good environment without peer troubles.

"But if Alonso decided to go to live in Hawaii with the girlfriend, I have no doubt that for human and professional reasons [I would choose] Vettel. He would be very good for us.

"I like Vettel, because he is not presumptuous. He wants to win but he is not arrogant. Michael [Schumacher] told me many years ago that coming from karts, Vettel had the most potential of any young driver and he was right."

After finishing fourth in the 2012 drivers' standings in 2012 - 91 points behind Germany's Vettel - McLaren's former world champion Hamilton, 27, will instead line up for Mercedes next season.

Di Montezemolo, 65, said 31-year-old Spaniard Alonso, who narrowly lost out to Red Bull's Vettel in this year's championship despite having an inferior car, was a powerful mix of the good qualities of two great Ferrari champions - Niki Lauda and Michael Schumacher.

"Niki was very intelligent in the race and the first driver to be closer to the team, details, working even in the night," he said.

"Michael was, for me, a war machine in the race because he was in condition to do 60 laps like qualifying.

"Fernando is a good mix between the two. He is very intelligent. He knows when to push, how to save the tyres, when to attack, super intelligent and super quick, too.

"It is difficult to make comparisons [across different eras] but he is right at the top. But I'm very happy with Fernando. He is a key member of the team."