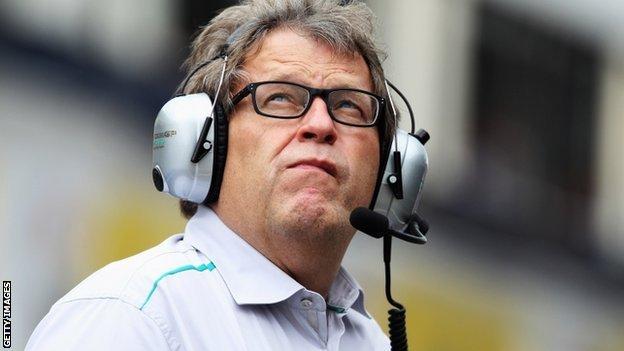 Mercedes sports boss Norbert Haug says he is leaving his position because of a lack of results in Formula 1.

Mercedes said on Thursday that Haug had agreed with the company's board that he would step down by "mutual consent".

Haug told German news agency SID: "There is always somebody who has to accept overall responsibility.

"Of course we have had our successes in the past three years, but not consistently enough so a direction had to be set and a marker laid down."

Mercedes have won one race - this year's Chinese Grand Prix - since taking over the Brawn team at the end of 2009, when the outfit won the drivers' and constructors' championships.

The decision to run its own team for the first time since 1955 was made as a major shift in policy by Mercedes, which at the same time chose to end its decade-long co-ownership of McLaren, who have won 18 grands prix in the same three-year period.

In October, it was announced that Mercedes had signed Lewis Hamilton to replace Michael Schumacher in 2013 and that triple world champion Niki Lauda had been taken on as non-executive chairman.

Lauda, 63, will take responsibility for liaising between the Mercedes board and the team, a role previously filled by Haug.

But Haug insisted Lauda had had nothing to do with his departure.

"I would like to once again make it clear that this is a decision that the board and myself reached jointly by mutual agreement," he said.

"Niki had absolutely nothing to do with it. We get on and respect each other just like we have done for many years and that is not about to change."

Ross Brawn remains as team principal and insists he is confident the team have put in place the changes they need to be successful.