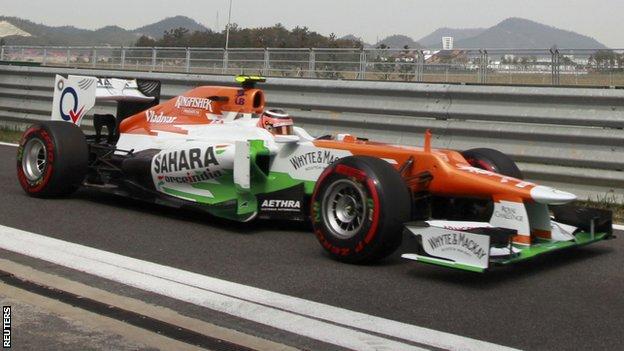 Nico Hulkenberg is to leave Force India and join Sauber next year.

And Mexican Esteban Gutierrez, the team's reserve driver, is tipped as a partner for the German, which would leave Kamui Kobayashi without a seat.

If he loses the Sauber seat, Kobayashi also has a chance to go to Force India but is likely to have to find some sponsorship to secure the drive.

Sauber have not yet officially confirmed Hulkenberg but the deal is understood already to be done.

Team principal Monisha Kaltenborn has said Sauber will announce their 2013 driver line-up "before the end of the season".

Gutierrez's potential promotion would come at least partly at the behest of Sauber's Mexican sponsors - the team has a relationship with the country's billionaire business magnate Carlos Slim, who Forbes magazine says is the richest man in the world.

Force India are keen on taking back Sutil, the German who lost his drive at the end of last year following his conviction in January on assault charges following an incident in a nightclub after the 2011 Chinese Grand Prix.

Sutil drove for the team through their various guises as Midland, Spyker and Force India from 2006-11.

But there is pressure from some quarters for the team to take Alguersuari, who was dropped by Toro Rosso last year despite an impressive 2011 season.

The Spaniard has spent this year as a test driver for F1 tyre supplier Pirelli and as BBC 5 live's analyst. He declined to comment on his future.

Buemi, Alguersuari's team-mate at Red Bull's junior team from 2009-11, is also in talks with Force India.

He, like Alguersuari and current Marussia driver Charles Pic, has also been linked to Caterham, where the futures of both Heikki Kovalainen and Vitaly Petrov are in doubt.

The team are keen to keep Kovalainen, who has driven for them since their debut as Lotus Racing in 2010, but the Finn is equivocal about staying.

"The most important thing is to keep the focus and make the best out of what I've got," he said.

"Then at some point... I'm getting old and if I want to be successful and win races, I have to look at the options.

"I think the team is doing the right things to move forward. We should be doing better than what we're doing. At the moment, we don't have any deals with everyone. We're talking."

Petrov is having difficulty finding the sponsorship he needs to secure a drive from his native Russia despite the country being poised to host its maiden grand prix in 2014 at the Winter Olympic host city of Sochi.