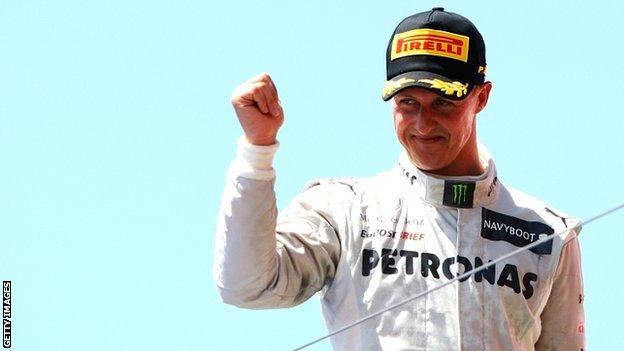 Mercedes driver Michael Schumacher was delighted to end his six-year wait for a podium with an impressive drive to third in the European Grand Prix.

The seven-time world champion returned to the sport with Mercedes in 2010 but has rarely challenged at the front.

Schumacher, 43, said: "Getting to third position is just awesome. To get there unexpectedly makes you extra happy."

The German was not penalised by the stewards for using the DRS overtaking aid when yellow flags were out.

It was the 155th podium of Schumacher's career and the first since the 2006 Chinese Grand Prix.

The German, who retired at the end of the 2006 season, has struggled to replicate the form that saw him win seven world titles - five of the them in succession between 2000 and 2004 with Ferrari - since returning to the sport.

Schumacher, who finished behind race winner Fernando Alonso and second-placed Kimi Raikkonen, has demonstrated a marked upturn in form - both in qualifying and the races - in 2012, however poor reliability has seen him retire in five of the first seven races and score just two points with two 10th-place finishes.

Things did not look to be going his way again in Valencia when he qualified 12th, but the German, who is in the final year of his three-year contract, turned it around in the race.

"I didn't actually think about a podium at all at the end of the race," said Schumacher, who became the oldest driver to stand on a F1 podium since Jack Brabham finished second at Brands Hatch in 1970, aged 44.

"It was crossing the line that I asked my guys 'where did we finish?' I saw Webber's pit board and close to the end it showed him eighth and seventh and I knew I was one place ahead of that one.

"And then the boys told me 'that's third, that's a podium'. I can't believe that. It's something I didn't really expect.

"That's what I'm here for: to be excited and those guys got me excited, no doubt. And hearing finally the message P3 - yeah, that's a sweet finish to an unexpected end."

The boys told me 'that's third, that's a podium'. I can't believe that! It's something I didn't really expect. That's what I'm here for: to be excited and those guys got me excited, no doubt

Schumacher, who was backed by team boss Ross Brawn to win this weekend, said a late decision to switch from a one-stop to a two-stop strategy proved crucial.

"[It] meant we had good tyres towards the end of the race, when other people either did a one or an early two-stop strategy and therefore struggled by the end because they had no tyres left," he said.

"The team and myself have been criticised here and there, particularly lately, and this is the best way to answer criticism, to go back and deliver as we did today, and therefore I'm proud, thankful and very excited."

The stewards said that they accepted that Schumacher had demonstrated a "significant reduction in speed in the waved flag zone" while marshals cleared up debris from the incident between Pastor Maldonado and Lewis Hamilton.

Red Bull's Mark Webber, who was following Schumacher, had said he saw the German use his DRS when the yellow flags were out but Schumacher responded: "Maybe he should watch it [the replay] properly. I drove [with] DRS until the yellow flags started and then closed it."

Red Bull team boss Christian Horner countered: "It was very clear Michael had it [the DRS] open, we know from bitter experience you're not allowed to use it.

"Seb [Vettel] got the penalty in Barcelona, [FIA race director] Charlie [Whiting] has made it very clear in the [driver] briefings DRS can't be used in a yellow flag area."

But the stewards said the Schumacher's incident "differs substantially" from the circumstances in which Vettel was penalised at the Spanish Grand Prix.