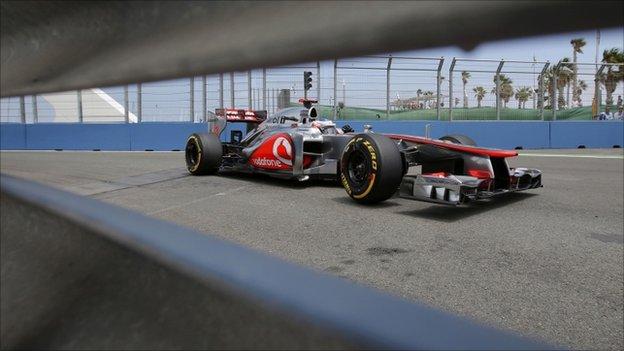 The Englishman was just 0.093 seconds faster than Lotus driver Romain Grosjean, whose team-mate Kimi Raikkonen was just behind in third.

The Force Indias of Nico Hulkenberg and Paul di Resta were fourth and fifth.

For Vettel at least, that is not a reflection of his competitiveness - he was on a lap right at the end of the session that would have put him easily fastest but he did not complete it.

Sebastian Vettel has led all but one lap in the last two European Grand Prix.

Vettel's pace underlines the impressive form Red Bull has shown since the start of practice in Valencia following some major updates to the car.

The reigning champion's team-mate Mark Webber, however, was only 19th after spending most of the session in the pits because of a brake problem.

Ferrari's Fernando Alonso appeared to be struggling, making a number of mistakes and never putting a decent lap together.

However, the fact that his team-mate Felipe Massa was ninth fastest suggests the Spaniard has room for improvement - he has out-qualified the Brazilian at every race so far this season.

BBC F1 technical analyst Gary Anderson said: "Seeing the Lotuses up there, it looks like they have got their qualifying trim sorted out pretty well.

"It's nice to see Jenson Button back up there, too. I don't think Alonso is finished yet, he's down in 12th but I think he'll be up there. We didn't see Vettel complete his lap either so there are a lot of unknowns for qualifying."

The 2008 world champion was out on the faster 'soft' tyre at the same time as team-mate Button but was 0.616secs slower.

"I still go for Hamilton," the former Toro Rosso driver said. "I think the Ferraris got traffic on their fast laps. I think we will see a different picture in qualifying."

Vettel was the fastest driver on the more durable 'medium' tyre earlier in the session, by 0.128secs from Sauber's Kamui Kobayashi.