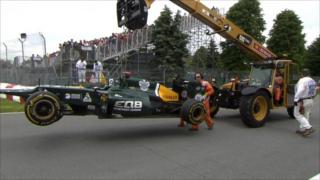 Lewis Hamilton sets the fastest time in an action-packed first practice session ahead of the Canadian Grand Prix, with Sebastian Vettel second fastest for Red Bull and Nico Rosberg and Fernando Alonso third and fourth for Mercedes and Ferrari respectively.

Caterham's Heikki Kovalainen brought the session to a halt with 40 minutes remaining after crashing his Caterham at Turn Nine, and proceedings were also interrupted by animals, with a fox and squirrel both spending time on track at the Circuit Gilles Villeneuve.