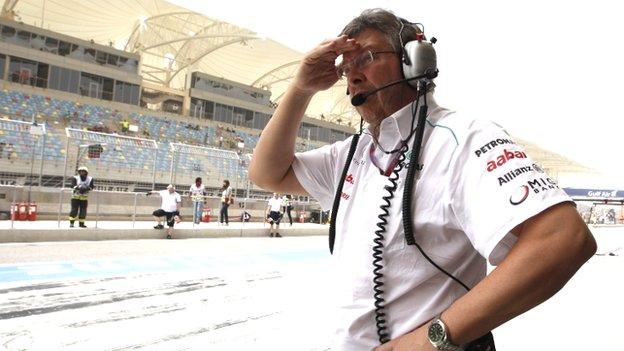 Mercedes team boss Ross Brawn has expressed his frustration with politicians criticising the decision to go ahead with the Bahrain Grand Prix.

Labour leader Ed Miliband was among those who said it should be cancelled amid ongoing civil unrest.

"Politicians in the UK were saying we should withdraw once we'd got here," Brawn said. "Why didn't they say something beforehand?"

Brawn said: "For somebody to try to make Jenson Button or Lewis Hamilton determine the foreign policy of the country is wrong."

He added that the sport needed to sit down and analyse whether going to Bahrain was the right thing to do.

"We're here now and after this event we need to sit down and discuss it," he said.

"We're committed to this race, we're having a race and after the race with proper judgement of what happened and what we saw we need to come to a conclusion."

Mr Miliband said on Friday: "I certainly think it is the case that, given the violence we have seen in Bahrain and given the human rights abuses, I don't believe the grand prix should go ahead."

He added: "What kind of signal does it send to the world when this grand prix is going ahead, given the concerns there are, given the violence we have seen in Bahrain, given the continuing issues around human rights?"

David Cameron responded: "It's a matter for Formula 1, but let me be clear, we always stand up for human rights and it's important that peaceful protests are allowed to go ahead.

"But I think we should be clear that Bahrain is not Syria, there is a process of reform underway and this government backs that reform and wants to help promote that reform."

McLaren team principal Martin Whitmarsh added: "I don't think it's helpful to wake up and hear we shouldn't be here when we're already here, so I would endorse what Ross said."

Jean Todt, the president of motorsport's governing body the FIA, and F1's commercial boss Bernie Ecclestone have both said this weekend that there was no reason to call the race off.