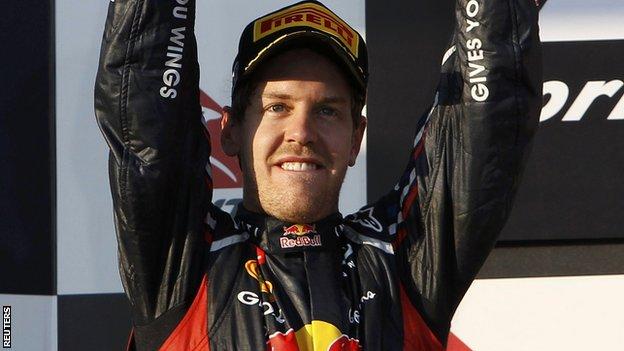 Sebastian Vettel will drive the newest version of the Red Bull 2012 car for the Bahrain Grand Prix - a week after deciding he preferred the old one.

The world champion reverted to an older car design for Sunday's Chinese Grand Prix while team-mate Mark Webber continued with the newer one.

But Vettel said: "We believe it is the better solution.

"It was a good test in China. It gave us some good answers and it highlighted the weaknesses in the package."

I believe the potential is there, the car is quick and once we start putting everything together we will be in a better position in qualifying and the race

Vettel has been outqualified by Webber in all three races so far this year and has never been comfortable in the upgraded car that was introduced at the final pre-season test.

After poor performances in the opening two races of the season, he decided last weekend to revert back to the specification of the car he had first used in testing. But the move backfired as he missed out on a top-10 qualifying shoot-out in China for the first time since October 2009.

The team's belief that the newer design was quicker was highlighted during the race, as Vettel was caught and passed for fourth place by Webber on the penultimate lap.

The two cars have different positions for their exhaust exits, which affect the aerodynamics of the car and its handling.

Chief technical officer Adrian Newey told BBC Sport the decision to put Vettel into the older car in China was to give the team a chance to compare the two cars as the newer one had not behaved entirely as they expected.

Vettel said in Bahrain that, in the first two races in Australia and Malaysia, he had felt the car was "a bit too nervous" and he "felt a bit happier in China".

He added: "It was a very good confirmation and it highlighted the weaknesses of the package we introduced on the last days of testing."

He said going back to the newer-spec car for Bahrain was "a big change for myself, so we will see how we get on".

And the German said Webber was not entirely happy with the newer car either.

"It has been the same for both of us," he said. "It's not fair to say I was all over the place and Mark was perfectly happy.

"We sit there talking about what was going on. Both of us weren't happy, especially myself in qualifying, I was little less confident and comfortable than last year.

"That's one of the main things we need to work on and then we and I should be in a better place."

Vettel cantered to last year's world title, his second in a row, with 11 wins and 15 pole positions.

This year he is fifth in the championship after three races, behind McLaren drivers Lewis Hamilton and Jenson Button, Ferrari's Fernando Alonso and Webber.

"We are quite a bit away," he said, "but I believe the potential is there, the car is quick and once we start putting everything together we will feel a little more comfortable and we will be in a better position in qualifying and the race."

Hamilton is leading the championship after finishing third in all the first three races.

He said: "The target every year I think is to have consistency and sometimes it just doesn't go to plan but this year I think we've been quite fortunate.

"Finishing on the podium for the first three races has been fantastic for us.

"Obviously it's very early in the season. In previous seasons you've seen championship leaders swapping and changing throughout the year so it doesn't really mean too much at the moment."