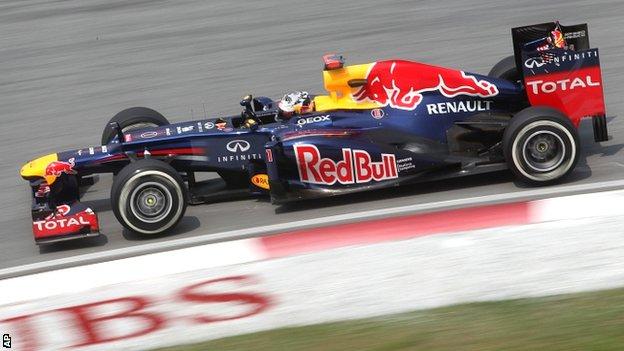 Red Bull enjoyed one of the most dominant Formula 1 seasons in living memory in 2011 when the team secured 12 victories and 18 pole positions on their way to both the drivers' and constructors championships.

Energy drinks mogul Dietrich Mateschitz entered the sport by purchasing the Jaguar team - which was formerly Stewart Grand Prix - and recruited David Coulthard and Christian Klien as his drivers for his debut season in 2005.

Progress was slow, as the newcomers struggled with reliability and spent much of their time in the midfield for their first two seasons. The first highlight came in 2006, when Coulthard secured the team's first podium in Monaco before Vettel made the big breakthrough by mastering wet conditions to win the 2009 Chinese Grand Prix.

The team got it all together in 2010, with Vettel snatching his maiden title at the final race in Abu Dhabi having not led the championship all season. The next season was one-way traffic, as the German netted 11 wins on his way to a second triumph.

To continue to reduce costs, whilst not detracting from the show.

F1 needs a balanced combination of independent teams and road-car manufacturers. However, it is vital that regulations prevent costs from spiralling out of control.

Don't crash, as we don't have any spares.

What kind of team boss are you: hairdryer treatment or arm around the shoulder?

Arm around the shoulder - when required.

Washing cars at the age of 10.

I don't have one.