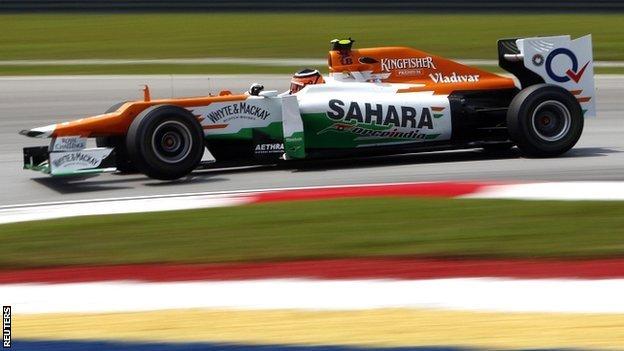 Formula 1 welcomed its first Indian racing team when businessman Vijay Mallya bought the Spyker team in 2007 and rebranded the outfit Force India for 2008.

The team, which can trace its origins back to Jordan in 1991 and subsquently raced under the Midland and Spyker names, runs in its national colours orange, green and white.

Adrian Sutil and Giancarlo Fisichella were the team's first drivers, but progress was slow as the team struggled to improve a car that was used to running at the back of the field.

However, 29 races after their debut, former Renault driver Fisichella converted the team's first pole position at the 2009 Belgian Grand Prix into second place - the team's only podium to date - for their first points finish.

The following season, the team were regularly challenging for points with Sutil and Vitantonio Liuzzi at the wheel and they finished seventh in the constructors' championship, two places higher than the previous season.

In 2011, the team recruited Paul di Resta, who won the German Touring Car Championship title (DTM) with Mercedes the previous year, to race alongside Sutil and the outfit achieved its best finish constructors' championship finish with sixth.

Continuing to grow the fan base through exciting races and great entertainment.

Yes, because variety is good for any sport. You need larger and smaller teams to keep the interest high.

Fully investigate a situation before making a judgement.

Arm round the shoulder.

Worked as a paper boy.