"When people from England go and play for Celtic and Rangers, it's at the end of their careers. That's because it's very rare you get a move from Rangers to the Premier League."

Then manager of Charlton Athletic, Bowyer lost his prized asset to Steven Gerrard's side in a move he felt "didn't make sense". Three years on, Nigeria international Aribo is now a Premier League player with Southampton.

An Ibrox spell in which the 25-year-old played an integral role in Rangers winning a first top-flight crown in a decade culminated in reaching the Europa League final and a Scottish Cup triumph last term.

A reported package of £10m for a player signed for just £300k, and in the last year of his contract, is certainly smart business - but with the start of the 2022-23 campaign looming, where does this leave Rangers?

Here, BBC Scotland looks at what Giovanni van Bronckhorst will be missing in Aribo, the state of play with the Dutchman's squad, and who might be on their way to Ibrox.

What will Rangers be losing?

Before you touch on the adaptability and goal contribution Aribo brings, his availability must also be commended.

The attacking midfielder played 5,571 minutes over a staggering 70 games for club and country last term - more than any other player in world football.

During Gerrard's tenure, Aribo's versatility was key as he was regularly switched between the midfield three and the front trio.

Last term, however, with Van Bronckhorst dealing with a striker crisis after the injuries to Alfredo Morelos and Kemar Roofe, Aribo was tasked with leading the attack - a switch which "helped me realise what I'm capable of," he told BBC Sport Africa. 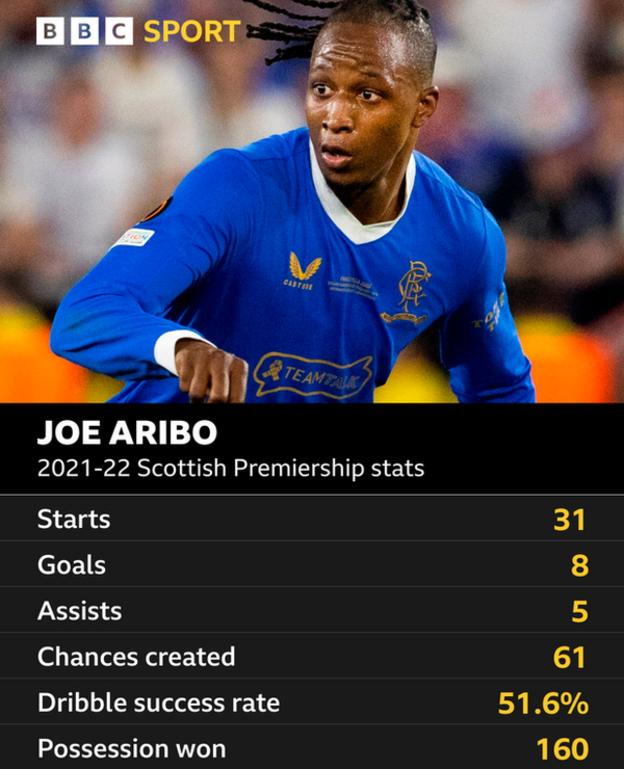 Deployed as a central striker, Aribo helped the Premiership club achieve the unthinkable of reaching the Europa League final, which ended in a heart-wrenching penalty shootout defeat by Eintracht Frankfurt.

The Nigerian netted the opening goal in the Seville showpiece, his 26th - and final - strike for the club.

Over his three years in Glasgow, Aribo contributed to 51 goals in 148 games, with 19 of those coming last term in the shape of nine goals and 10 assists.

No other Rangers midfielder scored more in any of the three seasons Aribo was at the club, a void Van Bronckhorst must fill with what he already has at his disposal or with the funds that will come his way.

After May's Scottish Cup triumph over Hearts, much was made of a potential rebuild at Ibrox, with the likes of goalkeeper Allan McGregor, mainstay centre-back Connor Goldson and veteran midfielder Steven Davis approaching the end of their contracts.

However, all three extended their deals, suggesting it may be more of a refresh for Van Bronckhorst's first full season in charge.

Scotland defender John Souttar has arrived from Hearts after agreeing the move in January, while Tom Lawrence and Antonio Colak bring firepower and experience.

Colak is a powerful number nine and the Croatian scored five goals in eight Champions League qualifiers for Malmo last season, including a double at Ibrox.

Lawrence is a more obvious replacement for Aribo, with the former Derby captain able to fit in as a second striker or attacking playmaker, although previously used mainly in a wide left position.

Alex Lowry is another handy option in the final third and the elegant teenager looks like he has all of the tools to step up and be a big player for Rangers but Van Bronckhorst may want further depth, with Aribo gone, along with last season's big-money loanees Aaron Ramsey and Amad Diallo.

Calvin Bassey has been linked with a big-money move after a stellar second half of last term, while key attacking duo Ryan Kent and Alfredo Morelos have entered the final year of their contracts.

The Ibrox hierarchy must now weigh up cashing in on their top assets or holding firm in their attempts to start the season strong and qualify for Europe's top club competition.