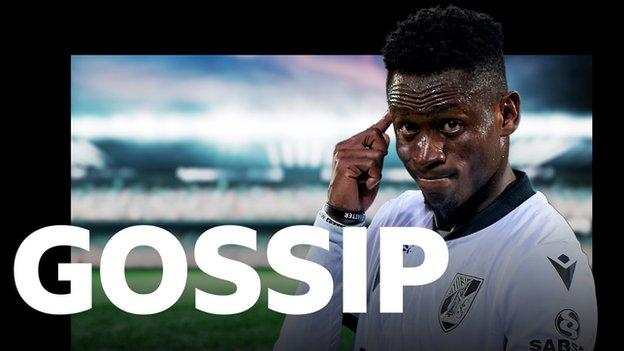 Celtic are keen on a move for 24-year-old Vitoria de Guimaraes midfielder Alfa Semedo, who previously spent time with Nottingham Forest and Reading, and the Scottish champions are at the forefront of securing the Guinea-Bissau international. (Abola)

Lanus left-back Alexandro Bernabei was shown a straight red card in his side's 1-0 win over Colon in Argentina's top flight on Sunday with the 21-year-old on Celtic's wanted list amid reports a deal could be close, despite his club wanting £4m - twice what the Scottish champions are keen to pay. (Daily Record)

Rangers and Celtic are mulling over a move for Nigeria striker Stephen Odey, with preliminary discussions held with Ibrox sporting director Ross Wilson, but Danish Superliga club Randers are demanding a fee of around £4m having recently rejected a bid of £2.6m plus add-ons from an unnamed Belgian Pro League club. (All Nigeria Soccer)

Randers sporting director Soren Pedersen has refused to deny interest from either Celtic or Rangers in 24-year-old Nigerian striker Stephen Odey, but he insisted there were no concrete offers despite sources in Nigeria suggesting talks had already been held with Ibrox sporting director Ross Wilson. (Daily Record)

Rory Wilson has been branded "one of the best strikers at his age in Europe" after the 16-year-old completed a £350,000 transfer from Rangers to Aston Villa. (The Herald - subscription required)

Celtic could be in line for a bumper pay day with their former left-back, Arsenal 25-year-old Kieran Tierney, having been included in a shortlist of Manchester City targets. (The Scotsman, print edition)

Lawrence Shankland's proposed transfer to Heart of Midlothian is moving forward following an intense round of negotiations with Beerschot, with the Scottish Premiership club having been quoted a £500,000 transfer fee for the striker who moved from Dundee United in a £1m deal last August and the Belgian outfit willing to accept a lower initial payment with the remainder made up in performance-related add-ons. (Edinburgh Evening News)

Belgian midfielder Tom Pietermaat, the 29-year-old who has spent eight years with Beerschot, has opted to sign for a homeland third-tier club after revealing he had become frustrated waiting for St Mirren to make him an offer. (The Herald - subscription required)

Aberdeen have placed a £3m price tag on Scotland midfielder Lewis Ferguson after Millwall started the bidding for the 22-year-old. (The Times - subscription required)