Jake Daniels' decision to come out as the UK's only openly gay active male professional footballer will "help break down barriers" in society, says the Duke of Cambridge.

The Blackpool forward, 17, spoke of the "relief" he has felt in publicly revealing his sexuality on Monday.

"Football should be a game for everyone," said Prince William.

Writing on Twitter, the FA president added: "What Jake has done takes courage and will hopefully help break down barriers that have no place in our society.

"I hope his decision to speak openly gives others the confidence to do the same."

On Monday, former England striker Gary Lineker told BBC Sport Daniels had laid a "path many others will follow".

"I think he will be massively accepted," he said.

"Not just in his own dressing room but players he plays against. I think, overall, dressing rooms wouldn't think about it. They will consider if you're a good footballer or not - that's all that matters.

Lineker believes Daniels' announcement "shouldn't be significant" and that football should have "passed this watershed moment a long time ago".

Daniels has already responded to the prospect of homophobic abuse by saying that supporters can "shout what you want, it's not going to make a difference".

Campaign group Kick it Out congratulated Daniels for a "historic" announcement, adding: "We need to remember there is a young man at the heart of it. A young man who should not have to be defined by this one moment, or this one part of his identity."

'What he has done takes incredible courage' 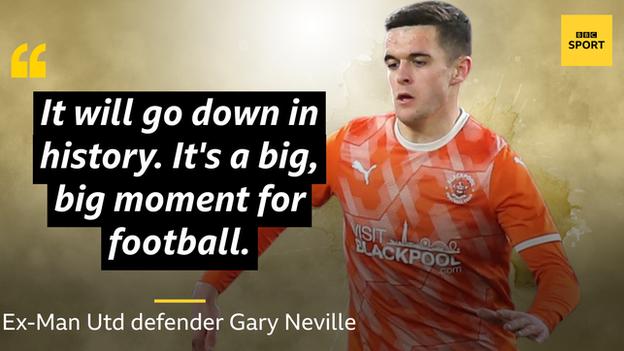 England captain Kane said Daniels deserves "massive credit" and stressed "football should be welcoming for everyone", while ex-Manchester United defender Rio Ferdinand called for "a safe and supportive environment for LGBTQ+ people in football and beyond".

Daniels, who made his professional debut this month, has said he has known he was gay since childhood and actively covered it up during school.

But he has drawn inspiration from, among others, Olympic diver Tom Daley and Adelaide United player Josh Cavallo - who came out last October and is the only current openly gay top-flight male professional footballer in the world.

Cavallo said he was "very proud" of Daniels' bravery, adding: "It's a wonderful feeling knowing that my story has helped guide Jake to be his true self."

"The game has not dealt with this issue well at all," former Manchester United captain Gary Neville told Sky Sports.

"We know that now it is something that is acceptable from a fan point of view, but it's not yet got into the dressing room. A dressing room can be an evil place... you think about the initiation ceremonies you go through, the peer pressure and vulnerability you have.

"The way in which Jake spoke was absolutely incredible. What he has just done takes incredible courage. It's a day of great importance for Jake and his family, but also for English football. It will go down in history. It is a big, big moment for football."

'The environment is changing'

The late Justin Fashanu was the first male footballer in the UK to come out while an active professional, doing so in 1990. The foundation set up in memory of the former Norwich City striker, who killed himself in 1998, has praised Daniels.

Fashanu's niece, Amal, told BBC Radio 4: "It's an incredible moment. I'm just getting constant goosebumps - it's like finally there's a footballer comfortable to be who he is. I feel like all my work I have been doing for the past 10 years is incredible, it's worth it, it's here.

"Obviously it's not going to be easy and fans probably will make mention of it but I don't think it's going to be as bad as we all imagined and definitely not even half as bad as what Justin had."

Shortly after Daniels' announcement, the Professional Footballers' Association issued a message to players thinking about following in his footsteps, stating: "Whatever you decide, and however you choose to move forward, we are here for you."

'He gets to live his truth and his authentic self'

While Daniels is the only openly gay active men's professional footballer in the UK, a number of players in the women's game have come out.

They include former England captain Casey Stoney, who said: "Wouldn't it be great if we got to a place where we didn't have to use the words 'guts and courage' to describe someone being comfortable being themselves?"

In the past, several men's players have come out once their playing careers were over - including former Everton and Aston Villa midfielder Thomas Hitzlsperger and ex-Hull City youth player Thomas Beattie.

Beattie, 35, says he was in contact with Daniels before Monday's announcement and helped set up restrictions on the teenager's social media platforms to guard against what "people may or may not say to him once the news breaks".

"It's a really overwhelming period and having gone through it myself, I know some of the emotions you go through," Beattie told the BBC. "You go from scared to excited to being worried to being apprehensive, but all of that combined is a really special moment.

"I know what it's like to live in this world of having two lives and hiding a piece of yourself. I'm buzzing he gets to live his truth and his authentic self."