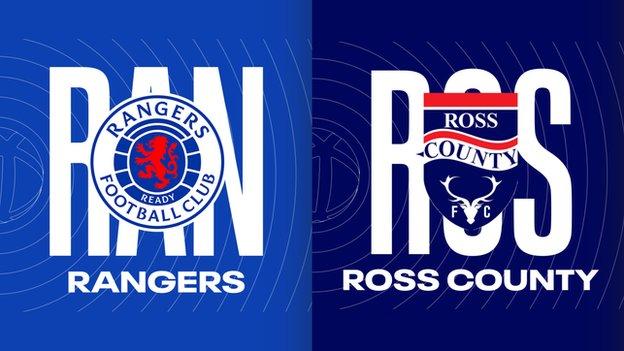 Rangers' reign as Scottish Premiership champions is officially over despite ending Ross County's European hopes with a comfortable home victory.

The hosts were rewarded for relentless early pressure when Scott Wright buried the opener from close range before James Tavernier added a second from the penalty spot.

County gave themselves an unlikely lifeline when Jordan White curled in, but the Ibrox side sealed the win with late goals from substitutes Fashion Sakala and Amad Diallo.

Celtic's draw at Dundee United means the gap at the top is four points, but with just one game remaining the title is now beyond Rangers, who had a six-point gap and an inferior goal difference of 20 to make up prior to kick-off.

"It was a good performance," Rangers manager Giovanni van Bronckhorst said. "We wanted to keep winning and keep the momentum going.

"It is finding the right balance. Obviously you want to keep going, you want to test players, but it is also important to get the rhythm and keep on playing and I think I saw that in my team."

The point earned by United, coupled with Motherwell's win at home to Hearts, also means European football is out of reach for County, who are now four points off fifth spot.

The domestic disappointment of letting a six-point lead slip has been dusted away by the building excitement of next Wednesday's Europa League final, but Rangers were still keen to treat their fans in their final home game of the season.

After a spell of early pressure in which Joe Aribo guided narrowly wide and John Lundstram was denied from close range, the Ibrox side opened the scoring after 13 minutes when Connor Goldson's near-post flick on was diverted in by Wright.

Rangers' fluid frontline - with teenager Alex Lowry at the heart of it - was causing County all kinds of problems, and it felt a matter of time before they added to their advantage.

County did well to pack the box and get their bodies in the way, but Alex Iacovitti's reckless sliding challenge on Tavernier allowed the Rangers captain to pick himself up and slot a spot kick past Ross Laidlaw.

Substitute White's fine curling effort from 20 yards gave County a glimmer of hope after Leon Balogun had headed off the far post at the other end.

But the visitors - who were lucky to have 11 men on the park after Jake Vokins' poor tackle on Wright - failed to capitalise as Sakala's diving header added a third for Rangers, before Diallo tapped in from Bassey's cross to cap off an easy night's work.

Man of the match - Scott Wright

With a potential career-defining night on the horizon for this group next Wednesday, and a Scottish Cup final to come a week on Saturday, reflection on the Premiership campaign can wait.

But no doubt when the time comes, Van Bronckhorst will have to analyse what went wrong after the winter break.

One positive the Dutchman can take from recent domestic games, however, is the impressive showings of 18-year-old Lowry. The Ibrox academy product looks more than ready to play a fair share of first-team minutes next term.

With top scorer Regan Charles-Cook and first-choice striker White starting on the bench, County boss Malky Mackay appeared to have one eye on Saturday's clash with United.

Regardless of who started, it would have been a tough ask for the Highland side to take anything from the game anyway - but with Europe now out of sight, Mackay will surely question his team selection.

A top-six finish is still a remarkable achievement, but fifth spot was a real possibility. Post-split defeats to both Old Firm clubs have not determined that, though. Saturday's defeat at home to Motherwell is the one Mackay will pinpoint as being pivotal.

Rangers boss Giovanni van Bronckhorst: "In the first half we were going at full speed. The rhythm was good, we were creating a lot of chances and there should have been more goals.

"In the second half we could rotate. It is important this week to give as many players minutes to be ready for the games that come ahead."

Ross County manager Malky Mackay: "I am really proud of the players. There is an immediate disappointment because we couldn't take it to the last game of the season.

"But I spoke to the players and told them how proud I was of them this season when you think of the budget of the football club. We have consistently shown we can go toe-to-toe with most teams in the league."

Both sides end their league campaigns on Saturday (12:15 BST) as Rangers travel to Hearts in a dress rehearsal of the Scottish Cup final, while Ross County are at home to Dundee United.