"Hold on for the ride ahead". After being buffeted by questions about his controversial past, Malky Mackay ended his unveiling as Ross County manager with a rallying cry to a sceptical support.

Eleven months on he has delivered on his pledge, leading a dizzying ascent from bumpy beginnings to land County's first top-six Scottish Premiership finish in six years.

It's a turnaround deserving of rich acclaim, but Mackay remains a polarising figure in Scottish football.

Does the 50-year-old's history continue to cloud his achievements, and how should his County impact be assessed?

A smooth welcome was never likely when County zoned in on Mackay for their vacancy last May. In the six years since his last club role - a brief stint at Wigan Athletic - there had been no queue of clubs beating a path to his door.

County's supporter liaison officer, Kenny MacLennan, "expressed the concerns" of Dingwall fans "directly to the club" prior to Mackay being confirmed as John Hughes' successor.

Their unease stemmed from a much-publicised scandal that continues to stain the former Celtic and Scotland defender's reputation with some observers.

During his time as Cardiff City manager, Mackay sent racist, sexist and homophobic texts to a colleague. He apologised in 2014, admitting two messages were "disrespectful of other cultures".

The Scot faced no action following an English FA investigation, and has shown remorse in the intervening years, but the harsh truth is the infamy will follow him for the rest of his career.

He become something of a pariah until the Scottish FA went where clubs were reluctant to, hiring Mackay as performance director, and he served a four-year tenure before putting his head fully back above the parapet with a move to Dingwall.

Succeeding Hughes, who had been surprisingly let go after keeping County in the Premiership, intensified the spotlight.

From relegation scrap to European dream 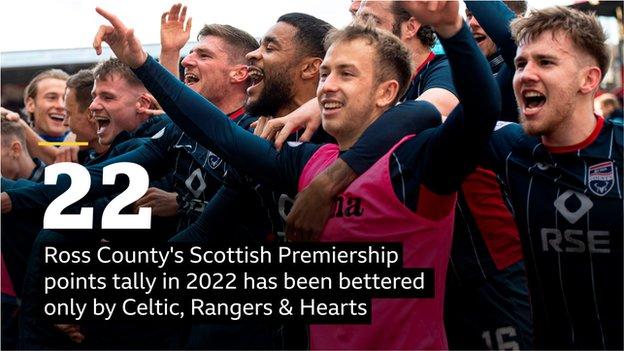 County had finished 10th in each of their two seasons back in the top flight but Mackay quickly set imprinting his own mark, overhauling the squad with a dozen signings arriving last summer.

A Covid-19 outbreak then hindered his preparations for the new season and two forfeited ties meant County's League Cup campaign was over before it had begun.

The Premiership kick-off brought further turbulence. After 10 league games County were winless and anchored to the foot of the table, four points adrift of Dundee.

Another grim survival fight looked assured. Despite flickering signs of life - one defeat in six - they remained bottom until beating Dundee on 11 December.

Momentum gradually grew and, come the turn of the year, County clicked spectacularly. Their 22-point haul from 14 games in 2022 is outdone only by the top three.

And a top-six place was secured in dramatic style when Joseph Hungbo's late penalty earned victory at Aberdeen to catapult Mackay's men from seventh to fifth.

County throw caution to the wind - they have netted 45 in 34 games, with only Hearts and the Old Firm scoring more. At the other end, only bottom club Dundee have conceded more than County's 54.

The risk and reward has paid off. And with fourth and fifth place earning entry to Europa Conference League qualifying, the prospect of a first-ever foray into continental competition offers a tantalising incentive for the remaining four games.

It will be a surprise if Mackay is not among the manager of the year contenders when Scottish football's end-of-season prizes are dished out.

His stock has risen to the extent he is the bookmakers' favourite for one of the country's plum jobs, the Hibernian vacancy created by Shaun Maloney's abrupt dismissal.

A quick glance at social media shows the prospect of Mackay, and the baggage he brings, taking residence at their club polarises the Hibs support.

For his part, Mackay has capitalised on a rare opportunity to revive his management career, with his feat of taking Cardiff to the English top flight a fading memory.

County may well face interest in their manager this summer, but chief executive Steven Ferguson won't let him go without a fight.

"He understood this was going to be longer than a short-term fix," Ferguson said. "Malky is under contract and he's enjoying working here.

"As far as we're concerned, we are one year into a minimum three-year project. I'd be pretty confident that Malky has really enjoyed this season, working really hard to turn around the start we had."