Ghana became the first African nation to reach the 2022 World Cup in Qatar after forcing their arch-rivals Nigeria to a 1-1 draw in Abuja, to qualify on the away goals rule.

However, there were ugly scenes at full-time as angry Super Eagles fans peppered Ghana's players and staff with water bottles thrown from the stands as they left the pitch.

Arsenal midfielder Thomas Partey gave the Black Stars a shock lead against the run of play in the 10th minute, before Watford defender William Trost-Ekong levelled from the penalty spot 12 minutes later after Ademola Lookman was fouled.

Ghana coach Otto Addo's game management was spot on as his team kept a defensive shape to earn a fourth appearance at the global showpiece.

Partey's early strike and goalkeeper Francis Uzoho's error helped Ghana advance to the finals on the away goals rule after the first leg finished goalless on Friday.

The Black Stars had missed out on Russia 2018, and their qualification denied Nigeria a fourth successive outing at the World Cup finals.

After conceding a penalty for the Super Eagles' equaliser, Ghana defended for much of the 90 minutes and rarely threatened the hosts.

Nigeria thought they had scored a second when Victor Osimhen went past Jojo Wollacott and slotted home, but the video assistant referee correctly ruled he was offside in the build-up to the goal.

Joe Aribo, Emmanuel Dennis and Lookman were all presented with opportunities but failed to punish Ghana. Leicester City's Daniel Amartey provided solid cover for the Black Stars' defence as they stayed disciplined at the back.

Dennis headed wide for the home side in the second half and Osimhen sent two acrobatic attempts past the post, but it was largely comfortable for Ghana in the closing stages as they held on to reach Qatar.

Local spectators peppered both the Ghana fans, some 100 or so, and the Black Stars players with water bottles - forcing the latter to cower and cover their heads as they battled their way down the tunnel following a mass pitch invasion.

The ugly scenes - with police hitting out at fans with batons - were allowed to continue by local security for around five minutes or so, and were only briefly interrupted when tear gas was thrown on to the pitch.

By that stage, a dugout had been overturned and smashed up as the unwanted-but-familiar side of football violence reared its ugly head.

Ghanaian supporters making their way from the stadium expressed their disbelief and dismay at their treatment, while football's world governing body Fifa will take a dim view of scenes which require considerable explaining from both Nigerian security and football officials. 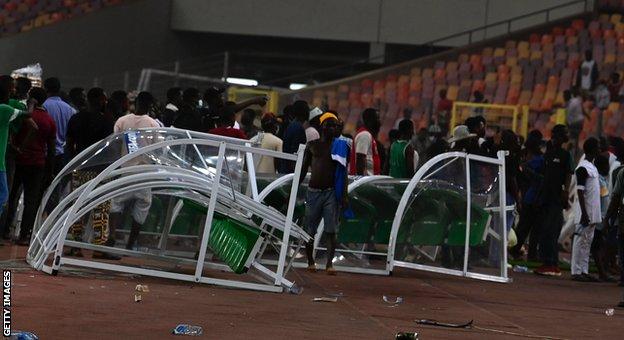