The title race is hotting up and with just one point separating Manchester City and Liverpool their showdown on Sunday at Etihad Stadium could have huge significance.

The winner will be favourite to take the title, but which players would combine to make an unstoppable force?

We asked you to pick your combined Manchester City-Liverpool team - and about 90,000 of you obliged, selecting eight Reds players and just three from the Premier League leaders.

Virgil van Dijk, Kevin de Bruyne, Mohamed Salah and Trent Alexander-Arnold were the clear top four picks, each selected by more than 89% of those who took part.

Alisson starts in goal, having been selected in 71% of teams, more than two and a half times as many as his rival for the Brazil goalkeeping jersey, Ederson.

Alexander-Arnold was the overwhelming choice at right-back, making 82% of teams - Kyle Walker was included in just 6% of your selections - while Andrew Robertson edged out Joao Cancelo on the other flank.

Ruben Dias partners Van Dijk at centre-back, while the midfield is two-thirds City with De Bruyne and Phil Foden your picks either side of Liverpool's Fabinho.

But the attack is all Liverpool - perhaps unsurprisingly given City's lack of out-and-out strikers - with Salah, Sadio Mane and Diogo Jota making up your front three.

You can still choose your combined XI and share it using #bbcfootball. 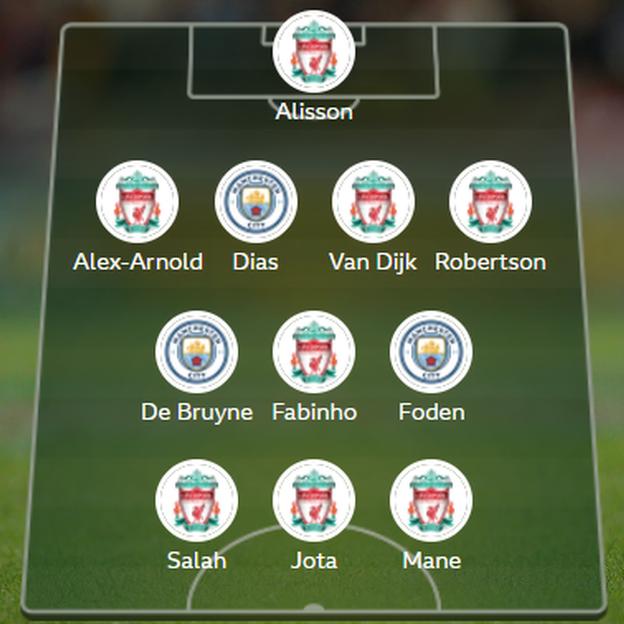