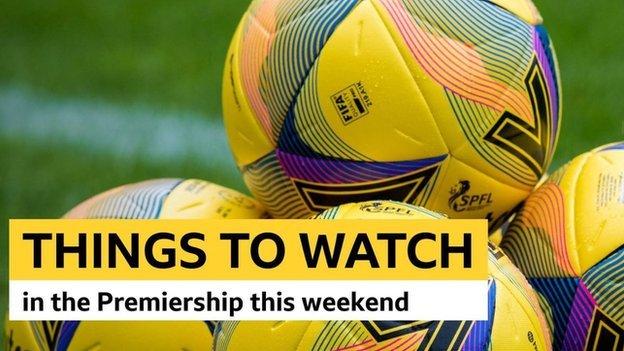 Little changed at the top and bottom of the Scottish Premiership after midweek fixtures, but will Saturday's busy programme prove more significant?

There will be the usual clutch of debutants as the January transfer window draws to a close, with none bigger than £19m Manchester United winger Amad Diallo having joined Rangers on loan.

Here's what the top-flight has in store...

This weekend is effectively the final dress rehearsal before the Premiership's top two face off in what could be a season-defining second Old Firm derby of the season, given Rangers are only four points ahead of midweek hosts Celtic.

The reigning champions head to Dingwall unbeaten in 12, winning 10 and having conceded only three goals in the process, since Giovanni van Bronckhorst became manager immediately after their League Cup semi-final defeat by Hibernian.

However, Rangers are not displaying the swagger that had them 23 points ahead at this stage last season and Wednesday's 1-0 win at home to Livingston was typical of the way they are having to dig deep to grind out results. That said, an impressive first start by precocious 18-year-old midfielder Alex Lowry provided much promise.

With Ianis Hagi out for the season through injury, the return from of inventive midfield duo Ryan Kent and Joe Aribo from suspension and international duty respectively will be particularly welcome - along with the knowledge that they have never lost in 17 meetings with County, winning the latest 11.

Indeed, after having lost 4-2 to Rangers home and away already this season, Malky Mackay's side have conceded 19 goals in their latest five defeats. One wonders what Rangers' new £19m man, Diallo, will make of little Global Energy Stadium.

Having narrowed the gap at the top by two points since the winter break, Celtic will expect to keep up the pressure given they are themselves unbeaten in 12 - winning 11 - as they prepare to host Dundee United.

Despite their own injury and international absences, Ange Postecoglou's side impressed again as they dominated third-top Hearts in midweek until having to survive a late flurry that suggests they remain vulnerable at the back.

United head to Glasgow having followed up their Scottish Cup win over Kilmarnock by ending a run of six straight league defeats with a 2-1 win over County in midweek.

They also drew on their last visit to Celtic Park, but they haven't beaten Celtic in 13 meetings, or in 45 visits since a 1-0 win in December 1992.

Motherwell survived Liam Donnelly's red card to hold Hibs in midweek and stay two points clear of the visitors in fourth place, but if they have any hope of finishing third, they must surely go one better when they travel t face the other half of Edinburgh.

Hearts, who are seven points clear, will take confidence from their late rally against Celtic despite their run of four straight wins coming to an end and will start favourites against visitors who have suffered four consecutive away defeats.

Meanwhile, fifth-top Hibs will look to narrow the gap on the two sides above in the race for European places as they host Livingston.