It is early September 2020. With Brazil averaging 850 deaths a day due to Covid-19 infections, no outdoor activities are allowed on the beaches of Santos, a coastal city south of Sao Paulo.

Robinho has already caused public outrage by being pictured playing his beloved footvolley (without a mandatory mask) on the Canal 6, his favourite waterside spot.

Facing public hostility and media scrutiny, he has to figure out a way to keep practising.

He asks his old team, Santos, whether he can use their facilities.

They immediately grant him access. But there is one major issue that is shockingly ignored: Robinho's 2017 conviction for taking part in a gang rape in Italy and a nine-year jail sentence he unsuccessfully appealed against and has subsequently refused to return to Europe to complete.

The man who was once Britain's most expensive footballer (joining Manchester City for £32.5m in 2008) had become a free agent after leaving Turkish side Istanbul Basaksehir and could be seen arriving at the Santos training ground in his Beetle almost every day.

His presence was welcomed by many officials, players and fans at the club, who appeared hopeful of luring him into signing for them for the fourth time in his career.

Santos would actually reach a five-month deal a month later, announcing his signing on 10 October, the same day Brazil celebrated its 'National Day of Fight Against Violence Against Women'.

The move prompted an outcry.

Bancada das Sereias, a feminist collective formed by Santos fans, would later tell Placar magazine: "We need our voice to be heard. We, Santos women's fans, don't want him at the club."

When a sponsor ended a contract over the signing and multiple others protested, saying it was disrespectful to women, Santos suspended his deal, stating that the player would be "focusing on his defence".

That ended last week when Robinho lost his final appeal against a conviction for taking part in the gang rape of a then 23-year-old Albanian woman in a Milan nightclub in 2013 and had his jail sentence upheld by Italy's top court.

Despite the public outcry, one of Santos' youth academy pitches is still named after him and his image can be found at multiple locations inside the Vila Belmiro stadium.

So far, no member of the club's board has come forward to speak about it.

"I'm no longer the president, so out of respect, it's the current administration who should address this issue," former leader Orlando Rollo, who brought Robinho back in 2020, told BBC Sport.

Robinho is now expected to be included on Interpol's list of wanted criminals.

The man capped 100 times by Brazil and a veteran of two World Cups has been nowhere to be seen publicly, having spent the past few months posting only family pictures and biblical verses on social media.

It is not clear whether he will play again. But the far greater question remains: will he ever serve his sentence?

Much to the anger of those who wish to see Robinho punished, the answer to that question may well be no.

Italian authorities have indicated they will seek the 38-year-old's extradition but it is unlikely he will serve his sentence as Brazil does not extradite its own citizens.

If he remains in Brazil, the Italians have said they will request his jail time be served in his home country's justice system. But that is out of their hands.

However, his likely addition to Interpol's wanted list means that the moment he steps into one of the other 194 countries with a treaty, he can be arrested and extradited.

Robinho has not publicly engaged with the legal proceedings, deciding not to attend any of the hearings during almost six years of trials in Italy.

Instead, he sought to keep living his life in as normal a way as possible.

On Christmas Eve 2021, weeks before his final appeal would be heard in Italy, Robinho was pictured alongside Neymar on a visit to the Paris St-Germain forward's grandmother's house. 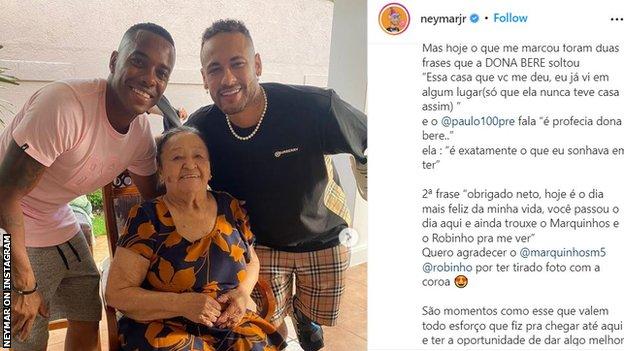 It came as little surprise that Brazil's best and most famous current player would be pictured with Robinho given that the pair enjoy a close relationship.

Neymar himself was the subject of a rape allegation, in 2019, and, according to Robinho, got in touch to offer the services of the legal team who helped prove his innocence.

That is one example of the status Robinho maintains in Brazil, and he is still popular with some of his colleagues.

He has a footvolley court in one of his houses and even hosted a tournament there in December which attracted names of the calibre of Malcom, who had a brief spell with Barcelona and now stars for Zenit St Petersburg.

It shocked many in his homeland, though, that despite the seriousness of the charges on which he was convicted, Robinho was still invited to a charity match held behind closed doors last month as part of the annual Natal Sem Fome (Christmas Without Hunger) event. He got to play at the Vila Belmiro alongside the likes of Shakhtar Donetsk's Junior Moraes and Zenit's Claudinho.

When the main game took place a few days later, this time broadcast to the entire country and fans in the stands, he chose to skip it.

Robinho has not featured in an official match since July 2020 and it is five years since he last appeared for the national team.

His international days are surely over, but it is far from certain that he will never play again.

He trained for a while with amateur side Portuarios and maintains he is not retired, so it would not be surprising at all to see him get another chance on the pitch.

And there is precedent. In last year's league title-winning manager Cuca, Brazilian football has a very similar story.

The man who led Atletico Mineiro to that Serie A triumph was also convicted for taking part along with three Gremio team-mates in a gang rape of a then 13-year-old girl in Switzerland in 1987. He stayed in prison for almost a month and was then allowed to return home. As a result, when the sentence of 15 months' jail time was announced, he was already back in Brazil and never served it. It had no significant impact on his football career as he even earned a call-up for the national team in 1991.

Ultimately, Cuca hung up his boots in 1996, immediately throwing himself into a coaching career that has been successful so far.

While Santos manager in 2020, it was he who encouraged the club to sign Robinho on a playing contract, describing him as "a wonderful person".

Now aged 58, he is touted as the most probable successor to Tite, who is set to leave his post as Brazil boss after the World Cup in Qatar at the end of the year.

"Robinho has to serve his sentence," said former international Walter Casagrande, one of Brazil's most popular football pundits.

"And we have to demand it every day because we can't let this violent crime be forgotten the same way it happened with Cuca. In both cases, I share the opinion of those who can't see any regret.

"I don't know how they can live their lives like this, having a clean conscience and sleeping well after such a cowardly act."

Globo host Ana Paula Araujo, who recently wrote a book called "Abuso, a Cultura do Estupro no Brasil" (Abuse, the Rape Culture in Brazil), told Placar that Robinho's reaction to his original conviction had been "bizarre" and that it showed "the rapist never feels like a rapist".

And last week, after Robinho lost his appeal, Sport TV's main host Andre Rizek said: "Robinho is still a free man. He can go anywhere he wants, work and sign for any team.

"My only doubt is how somebody is able to live freely after a rape conviction."