Manchester City were held to a draw at Southampton and saw their lead cut to nine points when Liverpool beat Crystal Palace on Sunday.

Chelsea also closed the gap with a 2-0 victory over Tottenham at Stamford Bridge, while Arsenal were held 0-0 at home by Burnley and Leicester drew 1-1 with Brighton.

Newcastle enjoyed a 1-0 win over Leeds and Norwich earned an important 3-0 victory at Watford in the relegation battle, while Everton continue to be sucked in following a 1-0 defeat by Aston Villa.

Manchester United left it late to beat West Ham 1-0 at Old Trafford and it was getting late by the time Wolves beat Brentford 2-1 after a long delay because of a drone in their fixture.

Check out my team of the week and then make your own selections towards the bottom of the article. 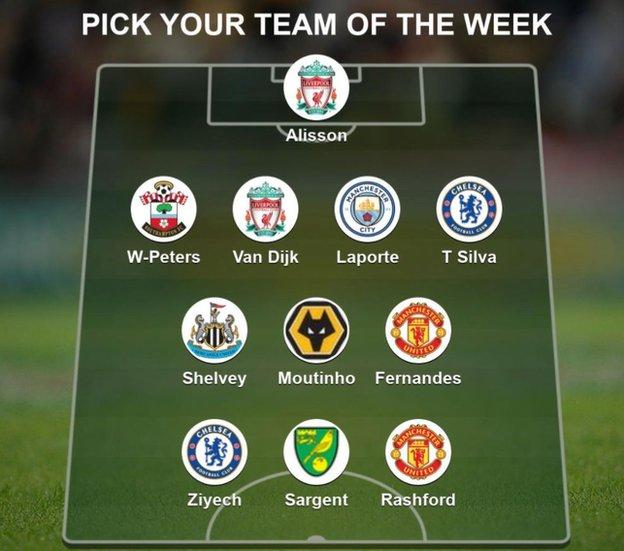 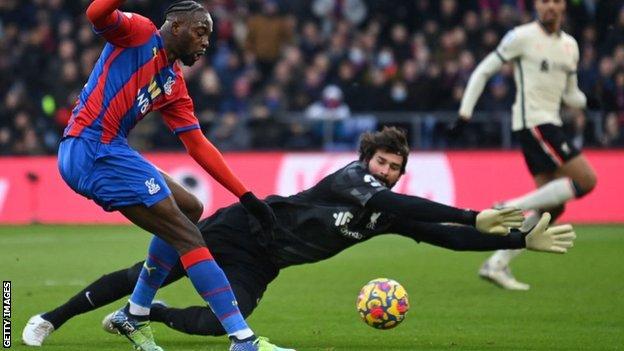 Alisson: The point-blank save from Jean-Philippe Mateta set the scene for what was another exceptional performance from Alisson away at Crystal Palace. Liverpool desperately needed to win this game in order to close the gap on Manchester City.

After further saves by Alisson from Michael Olise and a wonderful stop to thwart the cheekiest of back heels from Odsonne Edouard, the game was over. A point was no use to Liverpool in the battle for the title but Alisson has given Liverpool a glimmer of hope should Manchester City continue to drop points. Even if it's only a glimmer.

Did you know? Alisson was called upon to make four saves during Liverpool's win over Crystal Palace. 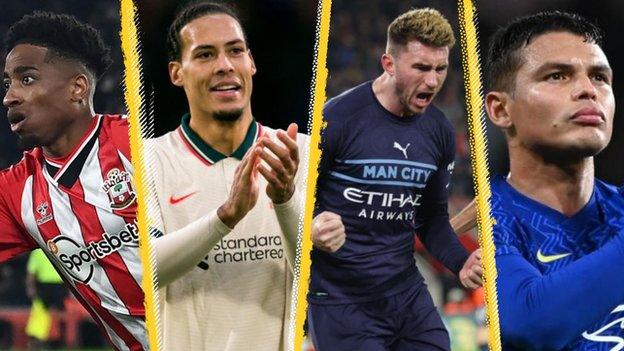 Kyle Walker-Peters: There were a number of notable displays for Southampton against a slightly unconvincing Manchester City that were worthy of a mention. Kyle Walker-Peters was certainly one of them.

The former Tottenham full-back seems to have found his wings at St Mary's. Walker-Peters struggled to get regular game time at Spurs but since his move to the south coast the defender has grown immeasurably. The Saints are pretty good at developing talented defenders who arrive with a reputation but little experience.

Former Chelsea defender Ryan Bertrand was another player who only became established when he moved to Southampton on a permanent basis. Walker-Peters looks like he's being groomed in the same mould.

Did you know? Walker-Peters scored his first Premier League goal on his 68th appearance in the competition (12 for Tottenham and 56 for Southampton).

Virgil van Dijk: When are teams going to take note? I'm saying almost on a weekly basis that Virgil van Dijk is the most dangerous player in the box on set pieces but sides are still conceding goals against him. His header that put Liverpool one up against Crystal Place was emphatic.

Liverpool are a different team with the Netherlands international in the side and, with Naby Keita, Sadio Mane and Mohamed Salah still on international duty in the Africa Cup of Nations, it's just as well.

Did you know? Van Dijk's opener was his 10th headed goal in the Premier League for Liverpool - the only defender to score more headers in the competition for the Reds is Sami Hyypia (17).

Aymeric Laporte: A lot was made of the performance by Mohammed Salisu against Manchester City but I've seen this lad play before and he can do something brilliant one minute and then something utterly reckless the next. I tend to prefer defenders who are consistent, steady and generally reliable. Aymeric Laporte falls into that category and is capable of scoring the occasional goal when his team is in trouble.

Did you know? Laporte has netted three Premier League goals this season, two of which have come in his last five appearances. He's never netted more in a single campaign in the competition, also scoring three times in 2018-19.

Thiago Silva: A man of Thiago Silva's age should have retired years ago. The fact that he's still playing top-class football at all is a testimony to his fitness and the way he's looked after himself.

However, Tottenham defenders should be a little concerned at being out-jumped and out-battled in the penalty area by a player who, in some cases, is more than 10 years their senior. Thiago Silva is a great player but when he arrives in the penalty area physical contact should count for something and, until teams like Tottenham and others realise that, Thiago Silva will continue to outmanoeuvre them.

Did you know? At 37 years and 123 days old, Thiago Silva became the oldest player to score in the Premier League since February 2013, when 39-year-old Ryan Giggs netted against Queens Park Rangers for Manchester United. 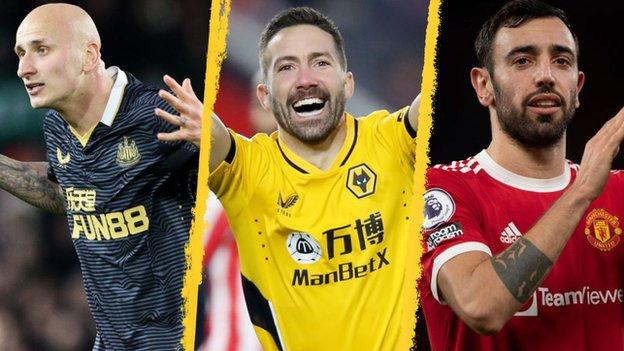 Jonjo Shelvey: What a result this was for Newcastle. To go toe to toe with Leeds having seen how they dismantled West Ham recently was as brave as it was impressive.

I said the last time I selected Shelvey for my team that he looked fitter than I had seen him for some time and in the mood. I also said it could save Eddie Howe a great deal of money in the transfer market if he could keep this lad level headed and retaining a sense of responsibility.

In other words, Shelvey must not get involved in scrapes, costly bookings and sendings off. If Shelvey can do that Newcastle may be a team that can start talking about survival again.

Did you know? Shelvey has scored 61% of his Premier League goals from outside the penalty area (14/23); of players with 20+ goals in the competition, only David Ginola (67%) and Laurent Robert (65%) have a higher ratio.

Joao Moutinho: This was a tremendous display by Wolves away at Brentford bearing in mind the interruptions they had to endure. Undeterred, the visitors played some wonderful football and most of it led by Joao Moutinho.

The Portugal international has been a key figure in some impressive results by Wolves of late. However his performance against the Bees was greatly helped by Ruben Neves. When these two had the ball Brentford didn't stand a chance.

Did you know? Moutinho has scored more than once in a single top-flight league campaign for the first time since 2016-17 with Monaco (2)..

Bruno Fernandes: Seven points taken in three games and United look better for it. The player at the heart of this mini renaissance is Bruno Fernandes.

He was brilliant at Villa Park, outstanding against Brentford and at the heart of anything meaningful against West Ham. The Portugal international has been magnificent these past few weeks. Marcus Rashford, Anthony Martial and Edinson Cavani look fresh after an enforced rest while Cristiano Ronaldo has looked a little tired.

Fernandes on the other hand appears to be one of those players who needs to play regularly otherwise he loses his rhythm.

Did you know? Bruno Fernandes (4) created more chances than any other player during Manchester United's 1-0 win over West Ham on Saturday.

Hakim Ziyech: So Chelsea are back in the swing of things after a dismal midweek performance against Brighton. The Blues looked like a completely different team against Tottenham and played like it.

Hakim Ziyech scored against Brighton and refused to celebrate. He then scored against Spurs and the whole team celebrated. Going to the Amex Stadium on a dismal January night might not be the most attractive event in the world but it's what they get paid for. Spurs might appear a very glamorous fixture but both games have the same points.

What a pity Chelsea couldn't summon the effort or have the will to do what a side like Chelsea should have done and knock Brighton out of the park. They beat Spurs but let the game they really should have won slip away.

Josh Sargent: His first goal was brilliantly improvised while his second was a classic header by a very promising young centre forward. I said last week that Norwich were playing like a team who refuse to accept that relegation beckons and I must say, as one of the first to condemn them, there is life in the canary yet.

Norwich's problem has been their inability to score goals on a regular basis. However since the arrival of Dean Smith as manager, Adam Idah, and Sargent have been let loose on to the Premier League and they are starting to cause a stir - surely much to the annoyance of Newcastle, Watford, Burnley and Everton.

Did you know? Aged 21 years and 335 days, Josh Sargent was the youngest player to score a brace in a Premier League match for Norwich since Dean Ashton v Crystal Palace in April 2005 (21y 143d).

Marcus Rashford: The England striker has been singled out on a number of occasions regarding his general attitude with questions raised about his contribution in games.

I must say that I don't think the arrival of Ronaldo has helped matters but this week Rashford came on as substitute against Brentford and West Ham and his attitude was nothing short of outstanding. In both fixtures he quickly put the games to bed within minutes of his arrival.

If Ralf Rangnick can utilise every member of his exceptional squad to maximum effect and not pander to the whims of Ronaldo anything is possible at United.

Did you know? Rashford (4) has scored twice as many 90th-minute winning goals as any other Man Utd player in Premier League history.

It gives me no pleasure watching a club of Everton's stature going through such turmoil. They've been through difficult times before but I can't help but feel some sympathy for the new owner Farhad Moshiri and chairman Bill Kenwright.

They clearly want what the fans want and that is success for the club but Rome wasn't built in a day. Mistakes have been made no doubt but there is something rather ugly about the way fans have turned on Kenwright. This is a man who has blue blood running through his veins and he will be deeply hurt by banners displaying, 'Kenwright must go', and' sack the board' blowing across Goodison Park during the game against Aston Villa.

What I would like to know is and replace them with who exactly?

Someone who wants the glory but afraid to invest in the club? There are plenty of those and they usually end up in the lower leagues. Kenwright has put the club in the hands of an individual who is not afraid to put his hand in his pocket. A mega investment in a new stadium isn't a bad start as a statement of intent if ever I saw one. Every club wants success for its fans and they were on to something when they captured Carlo Ancelotti but great managers, just like great players, are always in demand.

Everton need to appoint a manager who will provide them with steady progress and is moving at the same pace as the new regime.

Kenwright has safely handed the baton to a capable successor. He doesn't deserve this abuse.