It's another huge weekend in the Women's Super League, with the battles at both ends of the table starting to hot up.

Arsenal currently lead the way at the top but have hit a surprising mid-season slump, while just two points separate second and fifth place as the race for Champions League football intensifies.

"It's so nice to play a game of football," Chelsea manager Emma Hayes said after her side finally returned to action in the Continental League Cup on Wednesday with a 4-2 victory over West Ham.

The Blues haven't played a WSL game since their 1-0 defeat by Reading on 11 December, with two league games called off because of Covid.

That has left Chelsea with one game in hand on the Gunners - who have a four-point lead over their London rivals - and this weekend they'll be looking to take advantage of a Brighton side in poor form.

But Hope Powell's side, who have suffered four straight defeats, are not to be underestimated. "Brighton has been a tough game for us over the years," Hayes said.

"I know we have to start to compete strong in the league again and all of our attention will go into that game."

With Chelsea kicking off before Arsenal on Sunday, the Blues have a real chance to narrow the gap at the top and increase the pressure on Jonas Eidevall's side, who have lost five out of their past six in all competitions.

The Gunners are facing an in-form Manchester City, whose winning run stretches to six matches in all competitions. "I like challenges in football," Eidevall said.

"I like playing against the best teams because it pushes you to be the best. Playing against Manchester City really excites me. We know what we need to do better and we are all very committed."

"These are the big games you want," Manchester United manager Marc Skinner said before his side's game against Tottenham on Sunday.

With Chelsea, Manchester United and Spurs all tied on 21 points, and Manchester City just behind on 19, the race for third place and Champions League qualification is shaping up nicely.

"Tottenham are right next to us, the players don't need any more motivation than that," Skinner added. 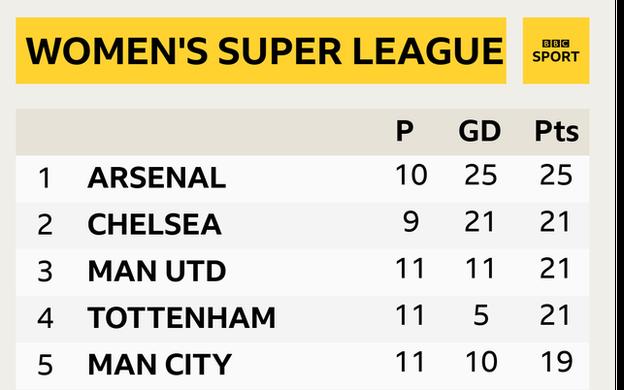 His side picked up a huge result in the Continental League Cup quarter-finals on Wednesday - knocking out Arsenal who pipped Manchester United to third place by one point last season.

Manchester United have also kept five clean sheets in a row in all competitions and won their past three WSL games.

Also finding their form at just the right time is Manchester City, who have joined the battle for the top three after recovering from their poor start to the campaign.

"I very much feel that the pressure is on whoever is playing us at the moment," Leicester City manager Lydia Bedford said, as her side prepare to take on Aston Villa on Sunday.

"We have nothing to lose and we'll play the game with that mindset and mentality."

Leicester have won two out of their past three WSL games, with last week's 1-0 win over Brighton lifting them off the bottom of the table.

Victory for the Foxes on Sunday would put them within one point of Villa, making it a three-way fight for WSL survival. 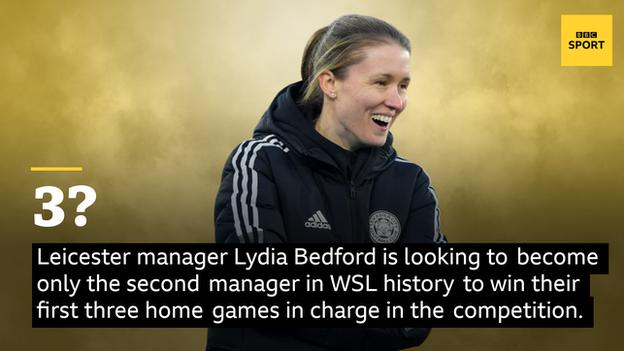 However, Villa manager Carla Ward said her side are "only looking upwards" in the table, adding that they are thinking about "how high we can finish".

Bottom side Birmingham, whose first win of the season came with a shock 2-0 victory over Arsenal two weeks ago, suffered a 5-0 defeat by Manchester United last week in a contrasting result.

Anything other than a win over Reading on Sunday will see them remain bottom of the table.

Will Asian Cup absences have an impact?

There are some big gaps in squads among the WSL as a result of players departing for the Asian Cup, which got under way in India this week.

Chelsea are without star forward Sam Kerr, whose nine goals and three assists have been pivotal for the WSL reigning champions this season.

Blues boss Hayes said she has challenged the rest of her squad to "step up and contribute more goals" to the side.

Chelsea will also be without midfielder Ji So-yun who has joined up with South Korea.

Arsenal are the side affected most, losing key personnel in Australia trio Lydia Williams, Steph Catley and Caitlin Foord, as well as Japan's Mana Iwabuchi, for up to three weeks.

However, their absences have been offset by a fruitful transfer window which has seen the arrivals of Stina Blackstenius, Laura Wienroither and Rafaelle Souza.

Tottenham and West Ham have also lost three players each to the tournament, while Manchester City are without Australia duo Hayley Raso - who has scored three in her past three games for City - and Alanna Kennedy.

Arsenal's decline in results and performances coincided with defender Leah Williamson picking up an injury in November, so her return for the Gunners on Wednesday night following a two-month absence was a timely boost for Eidevall's side.

Manchester City have also been given a lift with the return of England internationals in recent weeks.

Manager Gareth Taylor said the return of "big-game players" and experienced duo Steph Houghton and Lucy Bronze would be "massive" for the club heading into the second half of the season.

Taylor added: "They give you such a big presence on the pitch and give everyone else confidence. Their involvement really helps the rest of the team."