Scottish Premiership clubs failed in an attempt to persuade government to delay the 500 capacity cap on football games over the festive period, with the league's winter break brought forward by a week. (Record)

Dunfermline boss John Hughes, whose side will play to reduced crowds while the Premiership is on hiatus, also fears the cap on numbers in grounds will last longer than the three weeks beginning on Boxing Day. 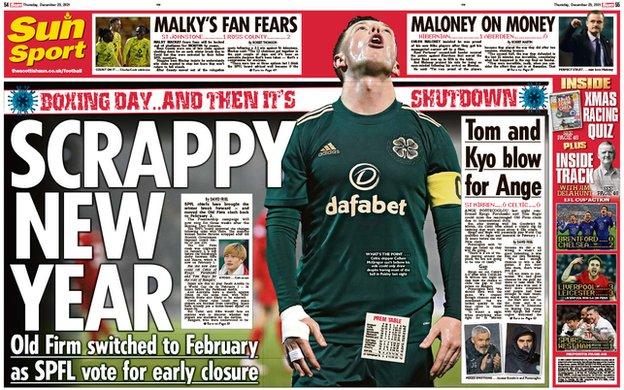 An SPFL rule states Rangers can apply for a postponement of the rearranged derby with Celtic in February, should their trio of Nigeria players remain on international duty in the African Cup of Nations. (Herald - subscription required) 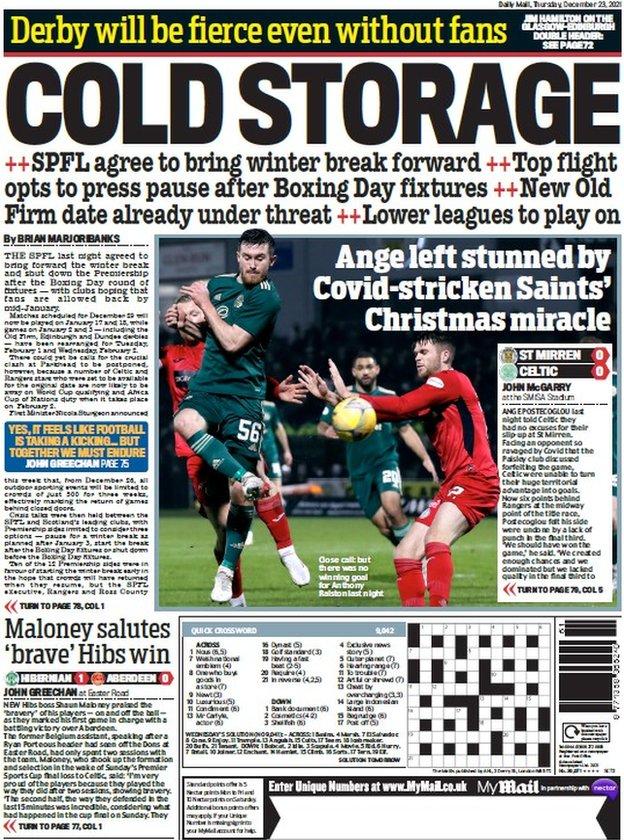 Kyogo Furuhashi and Tom Rogic could miss Celtic's rearranged match against Rangers in February because of international matches. (Sun)

Celtic manager Ange Postecoglou says his club will not indulge in "violin playing" if they do lose international players for domestic games. (Record)

Kyogo enjoyed his first experience of the popular Scottish soft drink Irn-Bru, suggest he might "down" the whole bottle. (Sun)

St Mirren manager Jim Goodwin suggests the SPFL had to bend their own rules to allow Wednesday's 0-0 draw with Celtic to go ahead, with loan players recalled amid a Covid outbreak at the Paisley club. (Record)

Goodwin admits he wanted the St Mirren board to refuse to play the match against Celtic after his squad was hit by Covid cases. (Scotsman - subscription required)

Aberdeen boss Stephen Glass feels a foul on one of his defenders was missed in the sequence of corners leading up to Hibernian's winner in Wednesday's match at Easter Road. (Edinburgh Evening Express - subscription required)

But Hearts fear left-sided defender Stephen Kingsley will be out long-term with an ankle injury. (Edinburgh Evening News - subscription required)

Scottish defender Aaron Hickey scored a stunning goal in Bologna's 3-0 Serie A win away to Sassuolo on Wednesday. (Sun)