Free-scoring Fulham extended their advantage at the top of the Championship to five points as they hit Birmingham City for six at Craven Cottage.

Blues defender Marc Roberts put through his own net before Fulham - who have now scored an incredible 19 goals in three league games - cantered to a 4-1 first-half lead.

Neeskens Kebano, Fabio Carvalho and Tom Cairney all struck in the space of eight minutes, only for Ivan Sunjic and Gary Gardner to halve the deficit either side of the break.

But teenager Carvalho scored the first double of his career to make it 5-2 before Antonee Robinson netted in added time to seal victory and condemn Birmingham to a sixth game without a win.

Fulham's last two games have now finished 6-2 following Saturday's victory over Bristol City, with Reading on the end of a 7-0 scoreline a week ago.

They are the first English side in 88 years to score six or more goals in three consecutive games, a feat last achieved by Chester in the 1933-34 season.

Robinson's strike with virtually the last kick of the game was also their 70th Championship goal of the campaign.

Surprisingly, Championship top scorer Aleksandar Mitrovic failed to add to his 27 goals this time around, although he played his part in Fulham's 10th-minute opener. The Serbia striker put Roberts under pressure as he lunged in before the defender sent Harry Wilson's cross over his own line.

Despite being utterly dominated in terms of possession, Blues kept their hosts at bay until the last 10 minutes of the first half, at which point the Fulham conveyor belt whirred into top gear again.

Kebano made it 2-0 on the run, slamming Denis Odoi's cross into the roof of the net and Robinson supplied the assist from the opposite flank for 19-year-old Carvalho to direct his header into the far corner two minutes later.

The two previous scorers then combined to set up Cairney for the home side's fourth goal, a low drive that flew in off the post.

However, Birmingham responded on the stroke of half-time, with Sunjic collecting Jeremie Bela's pass and unleashing a thunderous finish beyond the outstretched arm of Marek Rodak.

That seemed to inspire the visitors and they began the second half brightly, with Lukas Jutkiewicz testing Rodak before Kristian Pedersen teed up Gardner to drill into the bottom corner from 25 yards.

If that had given Birmingham a glimmer of hope, it was extinguished just a minute later by Carvalho, who galloped inside onto Bobby Decordova-Reid's pass and buried it beyond Neil Etheridge.

At the other end, Rodak tipped over Ryan Woods' effort to deny Birmingham a late consolation and Fulham had the final word as Robinson lashed home their sixth from the edge of the box with just seconds remaining. 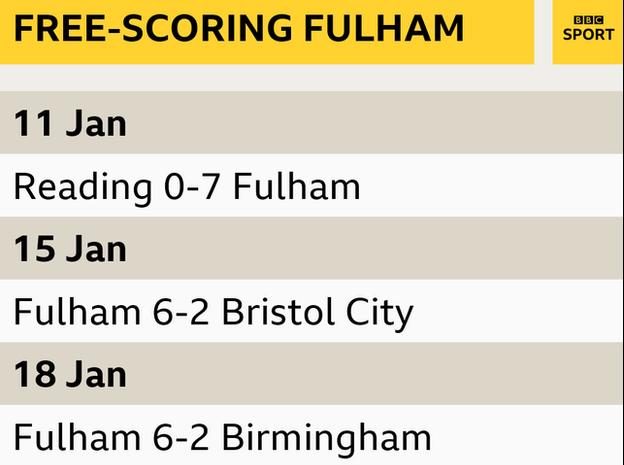 Fulham boss Marco Silva told BBC Radio London:"We are working really hard, they are understanding the way we can create problems for our opponents and after they are showing the quality on the pitch to do it.

"We are showing the capacity to do it on a match day and I'm really pleased to see it.

"Tonight we showed our quality, showed that we are getting better, showed that our players are confident as well.

"But we have to be humble at the same time, really humble as a team because despite three points and a fantastic score again, another one will come and be tough for us."

"We didn't do too much wrong and then they go 'bang, goal'. You can't stop the power, the strength, the quality they have.

"They're quality all over the pitch, they're a different animal to us and everything they do is with a purpose. We're a hard working team and no matter how hard the players tried, they still couldn't get close to them.

"We kept Mitrovic quiet but they've got so many players all over the pitch - the left-back's come and screamed one in from 25 yards.

"It's a tough night and we have to put that behind us."

Shots on Target
Home11
Away6