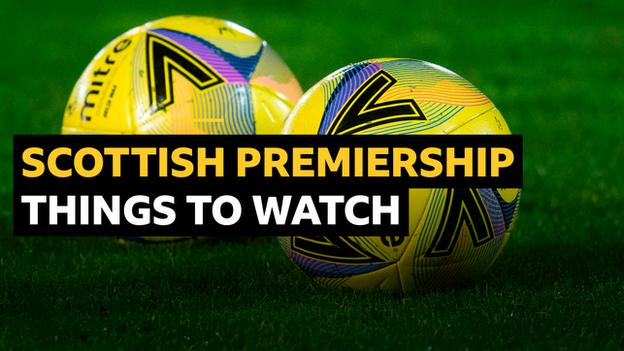 December is only a few days old, but the Scottish Premiership is already into its second set of fixtures in a packed month of top-flight action.

Rangers have the chance to extend their four-point lead at the top at home to Dundee in one of four Saturday games, with second-placed Celtic visiting Dundee United on Sunday.

Here's your guide on what to look out for in those games and the other four top-tier fixtures...

Aberdeen's 2-0 win over Livingston on Wednesday not only eased pressure on manager Stephen Glass after three consecutive defeats but also lifted his side above St Mirren into seventh place just in time for the Paisley side's visit to Pittodrie.

They will see this as an ideal chance to consolidate that position considering Jim Goodwin's side will arrive without a win in seven - and without a victory at Pittodrie in 15 visits since May 2011.

St Mirren have scored just once in five games but will see hope for their profligate forwards in the fact that Aberdeen's midweek victory was their first clean sheet in six outings.

Motherwell's visit to Easter Road could be pivotal in the race for European qualification places.

Three wins out of their past four, including Tuesday's 1-0 success at home to Dundee United, has lifted Graham Alexander's side six points clear of Saturday's hosts in fifth spot.

Hibs do have two games in hand, but the plaudits they received for reaching this month's League Cup final cannot paper over the cracks of a worrying downturn in league results.

Jack Ross' side again made it difficult for the reigning champions in midweek before succumbing to a late Kemar Roofe penalty, but they have now lost six of eight - including three in a row at home - and have won just one of the past seven.

They also now face a Motherwell side who did not lose over 90 minutes on three visits to Easter Road last season - Hibs winning their Scottish Cup quarter-final on penalties after a draw and defeat in the league.

Giovanni van Bronckhorst clocked up his third consecutive win since taking charge of Rangers - the first to do so since Jock Wallace in 1972 - with a workmanlike win over Hibs on Wednesday.

Afterwards, the talk was about how his side had recorded a first clean sheet in eight league games by restraining their normally cavalier full-backs. Whether that was a one-off ploy to ensure revenge for their League Cup semi-final defeat by the Edinburgh side or a long-term strategy remains to be seen.

Rangers host a Dundee side that have suffered 13 straight losses at Ibrox since a 2-0 win in March 2001. The Govan outfit have gone 10 domestic home games without defeat but have been held by Motherwell, Hearts and Aberdeen and only managed a 1-0 win over James McPake's side at Dens Park in September.

Dundee's results have improved since then and, following a worrying 5-0 home defeat by bottom side Ross County, they have responded with three wins in their past four games, keeping clean sheets in each of those victories.

Few would have predicted that double cup winners St Johnstone could find themselves at the bottom in early December.

But that is a very real possibility if Callum Davidson's side lose a fourth consecutive game when they host bottom side Ross County, and Livingston beat Hearts on Sunday.

Having scored just nine league goals - the lowest tally in the Premiership and 10 worse than County - it is obvious where the problems lie.

Unbeaten in three and with only one defeat in five, Malky Mackay's County arrive having gradually eaten into the gap between themselves and the sides above thanks in part to a scoring rate of 13 in the latest six fixtures.

Indeed, a 1-0 defeat on their last visit to McDiarmid Park in March was County's only loss in nine meetings between the sides.

What price another draw given five of the past seven have ended level, including a 0-0 draw in Dingwall in July?

For the second time within four days, Celtic face the prospect of playing catch up - and on this occasion might have to do it without three in-form players.

However, despite Dundee United's healthy fourth placing, all the statistics stack up against Sunday's hosts.

The only game Celtic have not won in their past six was a 3-2 reverse away to Bayer Leverkusen. That is their only loss in 12 and they had won five consecutive games on the road before that.

In contrast, Thomas Courts' side have only won one of six and have not beaten Celtic at Tannadice in 12 meetings since a 2-1 success in December 2014. However, it was 0-0 in March and United also drew 1-1 at Celtic Park in September.

Hearts head to Livingston hurting not only from a defeat by Celtic but also the feeling that decisions went against them.

On one hand, Robbie Neilson's side are without a win in six. But, on the other, they have only lost three times in 14.

Perhaps the key to turning narrow defeats or draws into victories would be reigniting Liam Boyce's season. The Northern Ireland striker has been languishing on the bench after a combination of a loss of form and injury.

Hearts will certainly fancy their chances against a Livingston side who sit second bottom without a win in five - including three at home - since a surprise win over Celtic and who have not beaten the Edinburgh side in five meetings since December 2018.