Aaron Hickey admits he is enjoying life in Italy with Bologna, but the 19-year-old Scottish left-back can see a move to England's Premier League in his future having had interest from top clubs around Europe, including Celtic, before his £1.5m move from Heart of Midlothian to the Serie A club in September 2020. (Sunday Observer)

Jean-Paul van Gastel, who stepped up to become Guangzhou City team boss after the departure of Giovanni van Bronckhorst, says he was never going to follow his fellow Dutchman to Rangers because he is finding life in the Chinese Superleague too much of a life-changing thrill ride. (Sunday Mail)

Manager Robbie Neilson has stressed the need for Heart of Midlothian to keep key players such as key defenders Stephen Kingsley and John Souttar, who are both out of contract next summer, at the club. (Scottish Sunday Express)

Former Hearts and Rangers winger David Templeton has revealed that he made his decision to retire at the age of 32 last week to concentrate on coaching within Hamilton Academical's youth set-up because he felt like his hamstring was going to snap at any time. (Sunday Mail)

Rangers captain James Tavernier believes his side are only going to get better under Giovanni van Bronckhorst than they were under Steven Gerrard. (Scottish Sunday Express)

Ahead of former Celtic skipper Scott Brown's return to Parkhead with Aberdeen on Sunday, Callum McGregor says his predecessor has inspired his captaincy. (The Herald On Sunday)

Scotland midfielder Billy Gilmour is "loving football" under new Norwich City manager Dean Smith having found himself on the bench under predecessor Daniel Farke while on loan from Chelsea. (Sunday Post)

This weekend marks the first year of David Martindale's tenure as Livingston manager, but the Scot says "it feels like 10". (Scottish Sunday Express) 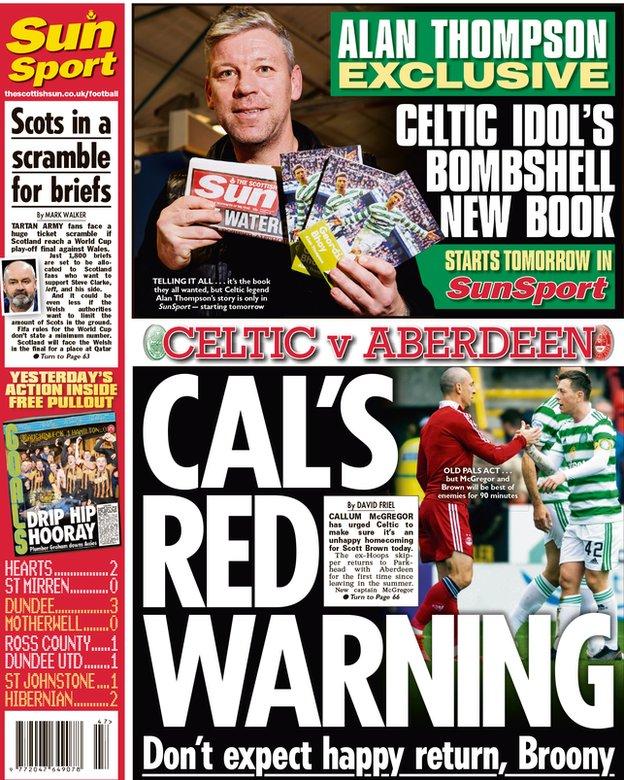