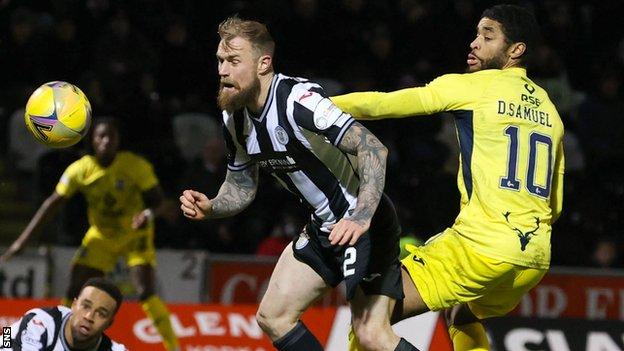 Ross County survived a second-half onslaught from St Mirren to make it a third Scottish Premiership game without defeat - but missed the chance to lift themselves off the bottom of the table.

With Livingston losing, the Dingwall side could have edged up the division but offered little in attack.

Instead, it is St Mirren who will be the more frustrated after passing up a glut of chances in Paisley.

Jim Goodwin's side are now seven games without a win and drop to eighth.

And, it is just one goal in five games for Saints.

County have been fighting to stay in touch with the rest of the division for much of the campaign.

But two wins in their previous four games, plus a late draw with Dundee United on Saturday, suggested they are up to the task, and they began the night with their tails up.

Dominic Samuel was both impressive and frustrating. He did well to control an awkward bouncing ball on his knee, then cut inside, but couldn't curl his shot past Alnwick. Soon after he blasted over after bamboozling the defence with stepovers.

Those missed chances gave encouragement to the hosts who grew into the game, and soon took control.

County goalkeeper Ashley Maynard-Brewer saved from Connor Ronan, before Eamonn Brophy twice went close - a drilled shot cleared off the line by Jake Vokins, then a weak effort from inside the box.

The frustration of St Mirren manager Goodwin was evident as Brophy and Dennis gave the County goalkeeper simple saves to make.

But the 22-year-old Australian would have to make fine stops from Ronan and Greg Kiltie as the home side began to dominate.

It was County, though, who could have stolen the points when Alnwick had to get down low to tip away David Cancola's effort, but for all the chances produced over the 90 minutes, it ended goalless.

Man of the match - Connor Ronan

What Goodwin would give for a new striker in January. The game was not short on chances, and both goalkeepers did have their moments with good saves, but the finishing at times left a lot to be desired.

St Mirren boss Goodwin has expressed his frustration numerous times this season about his side's lack of clinical edge. It cost them against Hearts on Saturday and again at home to County as they dropped points for the seventh game in a row.

County have begun to find a bit of form and have lost just once in five games, and although they drew a blank in this one they have hit the net 13 times in their past six fixtures.

The next game away to fellow strugglers St Johnstone on Saturday already looks a huge fixture though.

St Mirren manager Jim Goodwin: "It is incredibly frustrating. I need to try and put a positive spin on it, and that is that we were excellent in the second half.

"I don't think there'll be a team tonight that had more goal attempts than us. But to win games you've got to score goals and that's been our Achilles heel. We're doing everything right, kept a clean sheet, but at the moment it feels like a defeat."

Ross County manager Malky Mackay: "I thought it was a terrific game. In the first half we had two or three terrific chances.

"It's another clean sheet, it's one defeat in five, and it keeps us in touch with everything that's going on. What we've got there is a group of warriors that are going toe-to-toe every week."

St Mirren travel to face Aberdeen in the Scottish Premiership on Saturday (15:00 GMT), while Ross County are away to St Johnstone at the same time.

Shots on Target
Home11
Away7