All four English clubs are through to the knockout stage of the Champions League with a game to spare after another entertaining week of action.

In total, 11 teams are through with five spots in the last 16 still up for grabs.

One big name is already out and others could follow in the final round of matches.

In the Europa League, West Ham, Leicester, Celtic and Rangers are competing.

Here is the state of play.

Who is through to the knockout stage?

Who else can still reach the knockout stage?

What do sides need to do to qualify?

Manchester City progressed to the last 16 and secured their place as group winners by coming from behind to beat Paris St-Germain.

PSG are still through, however, after RB Leipzig won 5-0 at Club Bruges.

Falling in behind the Reds

Liverpool are through as group winners but behind the Reds things are interesting. Porto, AC Milan and Atletico Madrid can all still progress going into the final round of matches.

Borussia Dortmund are arguably the biggest casualty of the group stage. They are out after losing 3-0 to Sporting Lisbon, who sealed progression at their expense. Ajax were already through as group winners.

There was no such drama in Group D where Real Madrid and Inter Milan sealed their progress with wins over Sheriff Tiraspol and Shakhtar Donetsk respectively.

The meeting between the two European giants at the Bernabeu on 7 December will decide which club finishes top of Group D. 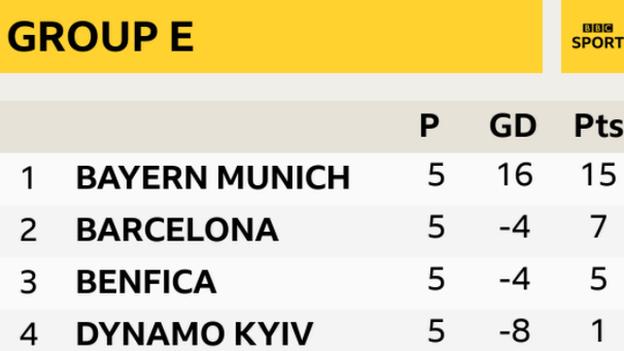 Barcelona face a tense group stage finale away to runaway leaders Bayern Munich. Defeat or a draw for Barca - and a win for Benfica, who host bottom club Dynamo Kyiv - will send the five-time European champions down into the Europa League. 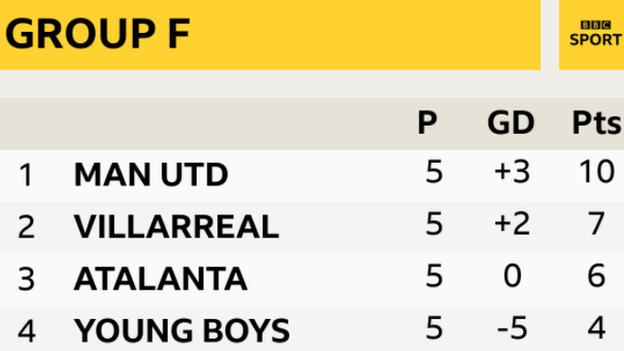 Manchester United not only qualified for the knockout stage with a win away to Villarreal - they also sealed top spot after Atalanta were held to a 3-3 draw by Young Boys.

The Italians will join United in the last 16 if they beat Villarreal in their final game. 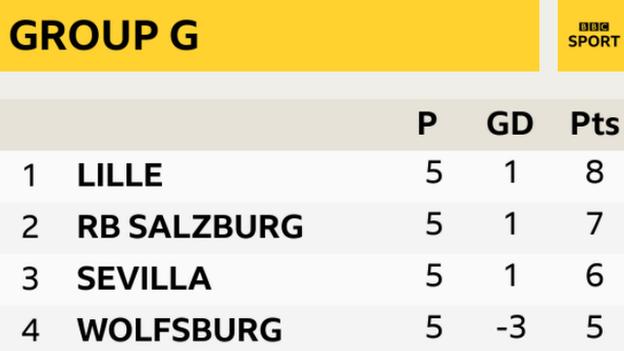 There is still everything to play for as the tightest of groups reaches its finale. Lille start the final round of group games top but could yet miss out as just three points separate the four teams. 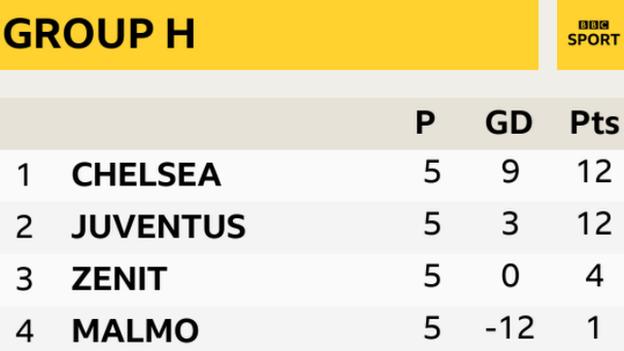 Reigning champions Chelsea are through to the last 16, as are Juventus. If the Blues match or better Juve's result in the last round of games, they will win the group.

Who can still qualify?

What do British sides need to do to qualify?

Rangers through in second

Rangers cannot qualify directly to the last 16 but a 2-0 win over Sparta Prague ensures they finish second and qualify for the knockout round play-offs. The play-offs will be contested between the eight Europa League group runners-up and the eight third-ranked teams from the Champions League groups. Rangers' final group game is away to Lyon on 9 December.

Foxes top but still have work to do

Leicester moved from bottom of the group to the top thanks to a 3-1 win over Legia Warsaw, but Brendan Rodgers' side need to get at least a draw in their final game at Napoli to advance. Only a win in Italy would be enough to guarantee top spot.

All four teams in the group can still advance.

Celtic dropping down to Conference League

Celtic's 3-2 loss to Bayer Leverkusen means the Scottish side will be dropping down to the Conference League, with Leverkusen guaranteed top spot and Real Betis finishing second.

Hammers win the group and avoid qualifying round play-off

West Ham's 2-0 win away at Rapid Vienna means the Hammers top the group with a game to spare and jump straight into the last 16, avoiding the qualifying round play-off.

Tottenham looked to be in a strong position to qualify, before they suffered a surprise, last-gasp 2-1 loss to Mura.

If they and Vitesse Arnhem finish level on points both teams have a similar record in the head-to-head of one win and one loss apiece and three goals both scored and conceded (away goals scored no longer counts).

However, if Vitesse beat Mura by three goals more than Spurs do against Rennes, providing they both win, then the Dutch side would advance and Tottenham would be out.