Sir Alex Ferguson described himself as "absolutely devastated" by the death of Walter Smith. Graeme Souness called his former Rangers assistant a "colossus". And Pep Guardiola paid tribute to "a humble, insightful and genuine man".

The death of former Rangers, Everton and Scotland manager Smith at the age of 73 has provoked a huge outpouring of tributes from the football world.

"A special person," is how Ferguson has described his friend and former assistant at both Manchester United and Scotland.

Smith, then Dundee United coach, was part of Ferguson's backroom team at the 1986 World Cup and became his number two at Old Trafford in 2004. As recently as September, the pair were together in Loch Lomond at a golf day.

"He was a great friend of mine for years and years," said Ferguson, 79. "In all that time you were dealing with a man with great moral compass in how he lived his life and the friendship he offered so many people.

"His contribution to football was immense. I'll miss him greatly."

'He made time for so many people'

It was after that World Cup that Smith first began a long and hugely association with Rangers, initially as Souness' assistant before taking charge in 1991.

What followed was a near-decade of dominance - including the domestic treble in 1993 - that helped the Ibrox club equal Celtic's record of nine successive titles in 1997. Smith was awarded an OBE for services to football the same year.

In a statement released in conjunction with former Rangers chairman Sir David Murray, Souness said "Scottish football has lost one of its finest", adding that "even in the proud history of Glasgow Rangers, Walter Smith stands out as a colossus".

They added: "Walter had a profound effect on both of our lives - certainly as a manager and a leader and a wise and trusted adviser, but always as a close and treasured friend. He made time for so many people." 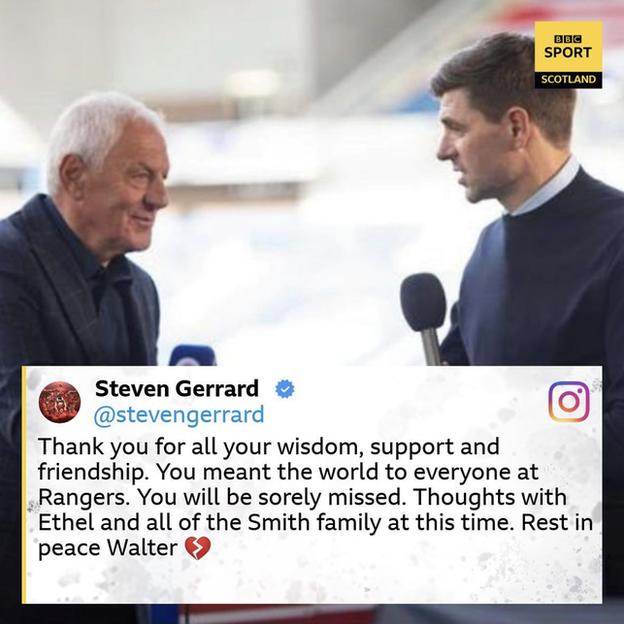 Smith helped rejuvenate the Rangers career of Ally McCoist in the early 1990s after the striker had found first-team opportunities limited towards the end of Souness' reign.

McCoist won the European golden boot in successive seasons and was later assistant to Smith with Scotland and Rangers.

He told Talksport that Smith was "like my second father", adding: "He was the best husband, father, friend, everything you want from a man. I can't tell you how devastated I am."

McCoist had been keeping former Rangers and Everton defender Richard Gough appraised of Smith's faltering health in recent times and it was he who broke the news to his former team-mate.

"It's very sad news but we knew that it was coming," Gough told Radio Scotland. "He'd been at home for the last 10 days to be with his family."

Perhaps among the more surprising tributes was from Manchester City manager Pep Guardiola, who came to know Smith through his work as a technical consultant for the League Managers' Association in England.

"I was of course very aware of Walter's impressive management career before I came to the Premier League," Guardiola said. "But I have had the opportunity over the past five years to see what a humble, insightful and very genuine man he was.

"I always enjoyed spending time with Walter and we had been planning to have dinner together again. I feel very fortunate to have had the chance to get to know him and I send my condolences to Walter's family, who have lost a very special man."

Gordon Strachan was one of Smith's successors as Scotland manager and told Radio Scotland the news "took my breath away for a while".

"The game that I love and the reason I'm still involved is people - and one of the greatest factors of my love of the game was Walter," he said. "Whenever I met him, life got better."

West Ham manager David Moyes, who took over from his compatriot at Everton said he was "a great Scottish manager but an even better man".

"He was honourable, he showed great dignity, and always demonstrated such class," he added. "He was a true friend and mentor, and a man I feel privileged to have known."