When South Korean forward Lee Geum-min first arrived in the UK, she had never lived by herself before, could not speak English and did not know how to cook.

It was a completely different world to the one she grew up in - and the football was a step up too.

The 27-year-old is one of six Asian players in the Women's Super League, but has started to make her mark in England with Brighton.

"I thought it would be so difficult to live in England but now, after two years, I have found different strengths and weaknesses," Lee told BBC Sport.

"I always had a dream of becoming a true, professional footballer. I started playing when I was around 10 in elementary school and by 12 I was playing in an academy.

"I had just finished playing for Korea at the World Cup in France in 2019 and I was packing my bags to go back to Korea, when I heard from my team-mate that an offer had come in from Manchester City.

"I had many emotions. I was surprised, but also a little worried to leave Korea. I'm happy that I decided to take on the challenge. But it took me time to come to my senses that it had actually happened."

Lee arrived in Manchester as a "skinny little kid" and had to adapt very quickly to a new way of life.

Described by those close to her as having an "endearing innocence", Lee would often turn to Chelsea midfielder Ji So-yun - seen as the "mum" of the Korean players - and Tottenham's Cho So-hyun for advice.

Lee, who said she found it "hard to understand the other players", used a translator for everything and, for months, ate digestive biscuits thinking they were a healthy snack.

"When I first came to the UK, I was really stuck," she said.

"It took me a long time to get used to the style of football that is played here too. It was a very difficult time to think back to, but I'm thankful for the experience because it has made me a better player and a stronger person."

Lee made just eight appearances for City before joining Brighton on loan. She struggled with the physicality of the WSL and saw first-hand what was needed to step up after partnering City's England defender Demi Stokes in weightlifting training.

"I didn't get much chance to play at Manchester City but I think that was probably my problem. Maybe I wasn't ready," added Lee.

"The physical part of the game in the WSL is very different than what I was used to playing in Korea. I had to change and adapt both physically and mentally."

The move to Brighton was a chance for Lee to finally show her quality.

Manager Hope Powell "showed faith" in the Korean and the club helped Lee regain her fitness and confidence.

"I'm very happy here at Brighton. The new training facilities are really good and I enjoy training and playing with the group of players that we have," said Lee.

"Brighton were patient with me and gave me that opportunity. Hope showed a lot of faith in me. I want to be a big help to this team and repay them for believing in me." 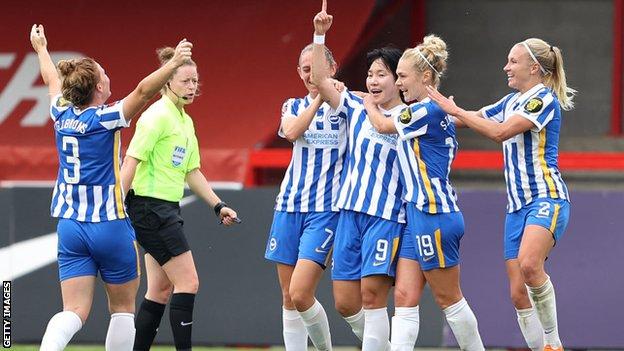 Lee also enjoys living near the seaside with England youngsters Maya le Tissier and Katie Robinson and has found a Korean pastor in Brighton to visit.

She spends her time relaxing watching dramas from her homeland on Netflix, but misses her dog back home - a Yorkshire terrier called 'Jang gun'.

"I have good housemates and I prefer to be with people. In Manchester I lived by myself at first and I found that hard," said Lee.

"My team-mates at Brighton have always made sure I am involved and I am so grateful for the kindness they have shown me.

"I like to go to the seaside with my team-mates. British food is so delicious, especially the English chips! I have to be careful with what I eat..."

Lee's footballing hero was Cristiano Ronaldo but hopes people will grow up admiring the talent of Korean female players now they are getting opportunities in the WSL.

"I think there are four Korean players playing in the UK now and they are important players for their teams," added Lee.

"I'm so proud of them and Korean players are so good. I hope more Korean players will be given opportunities to play in England when they have seen what we can bring to a team."