Chelsea may have to reverse their decision to send 20-year-old Scotland midfielder Billy Gilmour out on loan to Norwich City after Canaries manager Daniel Farke said "we are not here to develop players for other clubs". (Sunday Express)

Celtic manager Ange Postecoglou admits there is a balance between future planning and getting results in the here and now - and insists his revolution at the Glasgow club will not be rushed as "scouting and recruiting" are next on his to-do list. (Sunday Mail)

Aberdeen manager Stephen Glass admitted after Saturday's defeat by Dundee that he will not last much longer at Pittodrie if his side do not return to winning ways soon. (Sunday Post)

Angry Kevin van Veen has revealed that even Celtic's Bolin Bolingoli told him his team were denied a stonewall penalty in Motherwell's 2-0 home defeat, with the left-back admitting he had handled the Dutch striker's flick. (Glasgow Evening Times)

Motherwell manager Graham Alexander has blasted referees for multiple "blatant" penalties that he says his side have been denied against both Celtic and Rangers. (Scotland On Sunday)

Hearts manager Robbie Neilson suggests his side were denied a "stonewaller" of a red card when Rangers midfielder Juninho Bacuna clashed with defender Stephen Kingsley, after which the visiting team boss was sent to the stand during the 1-1 draw at Ibrox. (Herald On Sunday)

Celtic manager Ange Postecoglou took a swipe at those who had prematurely written off his team's title hopes after watching his side narrow the gap to Rangers at the top of the table to four points by replying: "I thought it was over mate." (The National On Sunday)

Celtic midfielder David Turnbull revealed that the decision not to celebrate his goal in Saturday's win over his previous side, Motherwell, was made with his family pre-match. (Scottish Sun On Sunday) 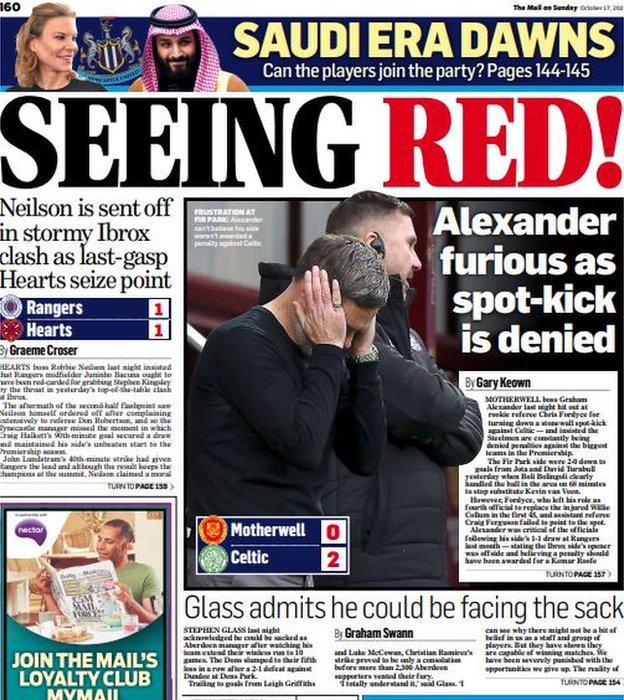