Two hundred and thirty one. That's how many days trundled by for Celtic on the road before a domestic victory was finally garnered on Sunday.

It is understandable, then, that Celtic manager Ange Postecoglou hailed his side's "tremendous character" as they secured that rare away-day high for the first time since February by dispatching Aberdeen.

It looked like the Parkhead side's woes on their travels would continue after Lewis Ferguson cancelled out Kyogo Furuhashi's opener, but Jota netted a crucial late winner.

"The important thing is the manner we did it," the Celtic boss said.

"It wasn't easy for our players to respond to that, but the fact we did respond to it should give the players plenty of confidence."

But can a priceless three points on the road spark a Scottish Premiership title bid?

Pittodrie win ends 10 in a row

Prior to Sunday, Celtic's last domestic away win came on a romantic Valentine's Day outing to Perth back in February. In fact, a win away to Jablonec in Europa League qualifying in August has been the only triumph at all since that outing at McDiarmid Park.

Since then, the Glasgow club have played nine away domestic fixtures that have racked up six defeats and three draws - while also conceding 12 goals.

Three of those defeats occurred this season, as Postecoglou started the Premiership campaign with a defeat at Hearts before suffering back-to-back away losses at rivals Rangers and Livingston. 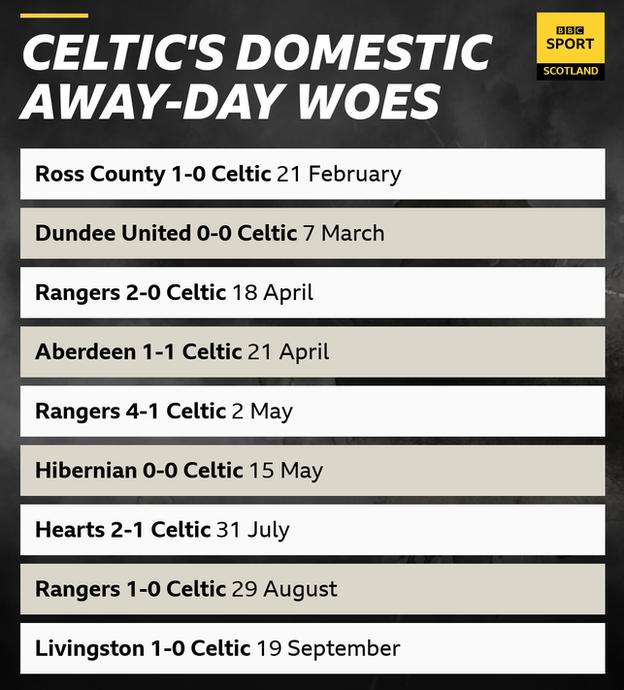 Can victory be turning point?

However, Celtic prevented that winless run hitting double figures with a vital victory at Pittodrie - a result Postecoglou hopes can be a turning point in his rebuild.

The Australian's side have shown this season they can blow teams away with their attacking threat, but the Celtic boss concedes his players were yet to show they can win ugly until the visit to Aberdeen.

"If there is one thing about us this year, we have definitely shown that when we play well we can definitely take it to teams," Postecoglou added.

"There have been games we have scored a lot of goals and played really well, but the one thing we haven't shown yet is that ability to find a way to win a game when we need it.

"I have felt it's in the team, but we've just not been able to get over that hump. Hopefully this gives them the confidence that they can."

'This gives Celtic a platform' - analysis

Former Celtic goalkeeper Pat Bonner on BBC Scotland's Sportsound: "Celtic need to hang in there. That's why this result is so vital.

"They couldn't afford to be any further points behind the teams at the top. It gives them a platform to build on, and that's the crucial part for Postecoglou."

Ex-Scotland striker Billy Dodds on BBC Scotland's Sportound: "It's all about making sure you're still in touch, because you can fall a long way behind and then you're on the chase.

"We saw that with Celtic last season. They just couldn't maintain and Rangers were relentless. They don't want that to happen again. Even this early in the season, this result is huge for Celtic."