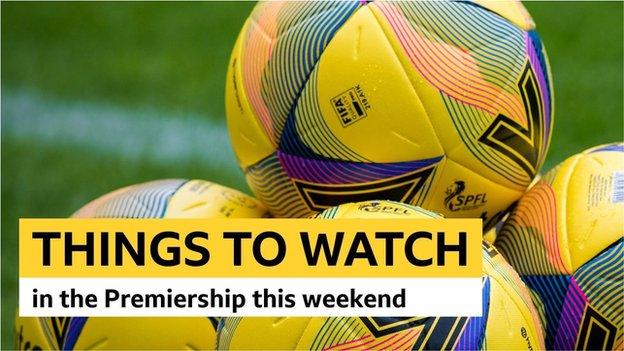 Half of the Premiership games - at Hearts, Rangers and Aberdeen - will attract crowds of over 10,000. With Aberdeen choosing to postpone their roll out, only supporters at Tynecastle and Ibrox will be subject to spot checks under the new certification scheme, but will be allowed entry regardless.

Once safely inside, this Premiership weekend offers up a top-of-the table showdown, Scott Brown's Celtic reunion, and Dundee seeking a much-need victory in a Tayside derby.

Whose momentum will falter at Tynecastle?

The silence is deafening from Robbie Neilson's critics now as Hearts jostle for top spot following promotion. So robustly have Hearts started the campaign that it begs the question - just how high can they finish?

In the Tynecastle men's favour, Rangers lack their of invincibility from last season and Celtic continue to struggle.

Neilson's side - unbeaten in the league and just a point off the top - can count on a strong spine from Scotland goalkeeper Craig Gordon through to centre-back midfielder Beni Baningime and Northern Ireland striker Liam Boyce.

Hearts continue to benefit from Boyce's current international exile, with the 30-year-old netting nine times in 12 appearances this season.

To keep their momentum ticking along, Hearts must negotiate a tricky fixture against another in-form side. Since steering Motherwell of relegation worries last season, Graham Alexander now has them peering down from fourth, just two points from the summit.

Such has been Alexander's transformative impact, only Rangers (56) and Celtic (44) have collected more points than Motherwell (42) since the former Scotland defender took charge at Fir Park in January.

Their vigorous style of play may not always be free-flowing, but it sure is effective. Will September's Premiership manager of the month claim another scalp?

Chest puffed out? Check. Glint in the eye? Check? Wide smirk or snarl? Check. The full Scott Brown repertoire is bound to be on show when he takes centre stage at Pittodrie on Sunday as his past and present collide.

After 14 trophy-laden years with Celtic, the experienced midfielder faces the Glasgow club for the first time since switching to become the heartbeat of Stephen Glass' Aberdeen.

The league table makes grim reading for Glass and Celtic counterpart Ange Postecoglou, two managers still in the infancy of their first Premiership jobs and encountering plenty of teething problems.

Celtic's worst start to a league season since 1998 leaves them in sixth place, while Aberdeen are one spot below having gone eight games without victory in all competitions and lost three successive Premiership matches.

After Celtic sank to another defeat against Bayer Leverkusen in the Europa League on Thursday, Postecoglou will need a big result to provide some optimism amid a haze of gloom.

Brown has spoken of his aim to turn Pittodrie into a "fortress" again, although it was anything but during his time at Celtic as he helped them rack up a formidable away record against Aberdeen.

The Dons' last home league win over Celtic came back in 2015, when Ronny Deila was still roaring, with eight defeats and two draws since.

However, Postecoglou's Celtic have taken zero league points from nine on offer this season, so vulnerabilities are there to be exploited if Aberdeen can rouse themselves.

Can Dundee ease their plight?

Unlike their points tally, Dundee's woes just keep mounting. Bottom of the table, no league wins, no goals in five.

Their chronic strike shortage isn't helped by a pair of forwards being embroiled in controversy. Leigh Griffith has been charged by the Scottish FA - and the police - for kicking a flare into a stand of St Johnstone fans, while Alex Jakubiak is awaiting scan results on a shoulder injury reportedly sustained a city centre altercation.

Should he recover from an ankle knock, Griffiths is guaranteed a less than warm reception from the St Johnstone support in Saturday's Tayside derby in Perth.

Dundee's hopes of reviving their season are at least bolstered by the hosts' defensive issues. The rocks on which St Johnstone's historic cup double was built last season are all missing, with Jason Kerr sold to Wigan Athletic and fellow centre-backs Jamie McCart and Liam Gordon both injured.

While Callum Davidson's men knocked Dundee out of the League Cup, they are just one win and three points better off in the league. And they have made a habit of toiling against newly-promoted sides, drawing all eight matches in a sequence stretching back to March 2019.

Hibs fans will file into Easter Road on Sunday for a top-of-the-table showdown - 50 miles away.

The continued lockout of away fans by Rangers - and Celtic - has Hibs head coach Jack Ross braced for an "intimidating" atmosphere in Sunday's trip to the champions.

With Hibs supporters having to make do with a beam-back in Leith, their team's hopes of keeping pace in the title race face an acid test at Ibrox.

Leaders Rangers are a point clear, but their run of 21 successive home league victories was ended in a 1-1 draw with Motherwell a fortnight ago. Another slip-up would be the first time they have dropped Premiership points in back-to-back Ibrox outings under Steven Gerrard.

They are also coming into the match on the back of a turbulent loss in the Czech Republic that was marred by booing of Glen Kamara by Sparta Prague fans prior to his dismissal.

Ross could do with his in-form forward ending that barren stretch as Hibs attempt to claim a first win over Rangers in three-and-a-half years.