Aston Villa and England forward Ollie Watkins, 25, is on a list of options for Tottenham. (Fichajes - in Spanish)

Chelsea are preparing a 120m euro (£102m) bid for Juventus and Netherlands defender Matthijs de Ligt, 22. (AS - in Spanish)

But Chelsea face competition from Juventus for 21-year-old AS Monaco and France midfielder Aurelien Tchouameni. (Calciomercato - in Italian)

Tottenham had an agreement in principle to sign Spain centre-back Pau Torres from Villarreal in the summer, but the 24-year-old "preferred to wait for a better offer". (AS - in Spanish)

Big questions for Tottenham, Nuno and Kane after derby defeat

Manchester City boss Pep Guardiola hailed Portuguese midfielder Bernardo Silva after Saturday's win against Chelsea, but would not confirm whether the 27-year-old still wants to leave the club. (The i)

Cristiano Ronaldo wants to retire at Manchester United. The 36-year-old Portugal forward then wants a coaching role at the club. (Sun) 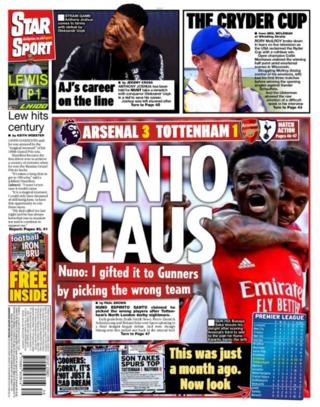