There have been a few false dawns for Arsenal fans - days where we, wrongly, thought we had got 'our' Arsenal back again.

Sunday's brilliant win over Tottenham might turn out to be just another one of those days, but maybe there's something different this time that means we can sustain it.

We certainly got the fans back, for starters. There was an amazing atmosphere at Emirates Stadium, and the Gunners supporters played a big part in what was a complete performance. I would have loved to have been there to sample it for myself.

It felt like an especially important day for manager Mikel Arteta, because he has not had many moments like it as Arsenal manager.

Arteta only had eight home games in charge with crowds before the Covid pandemic led to grounds being closed and, although this was his fourth north London derby as a manager, it was his first with any Arsenal supporters present. He's been manager for 43 home games, and only 12 of them have been at a full stadium.

So he needs days like Sunday to cement himself - in the right way - in the minds of the fans, who were singing his name at the final whistle.

It felt significant, in terms of getting everyone together again, because too often recently the fans have been divided - including over his future.

'The right system, with the right team' 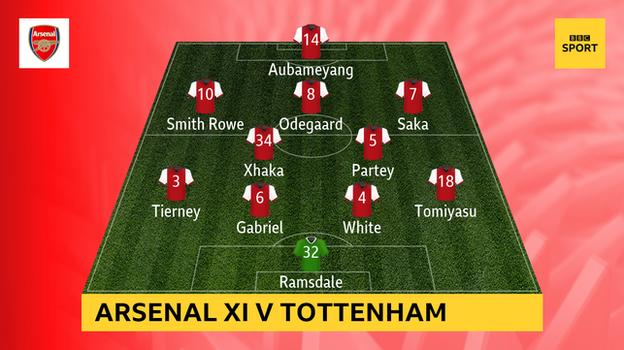 Arteta has had some difficult moments in the past few months, and the pressure was really building on him when his side started this season with three straight defeats, without even scoring.

It looks to me as if he used the time he had when the players went away for the international break in September to really have a close examination of himself and his methods, and find a team he feels he can trust.

Since then, he has made a number of clear changes to the personnel. In defence alone, he brought Gabriel back at centre-half and he also had summer signing Ben White available again to play alongside him.

Two other new players, Takehiro Tomiyasu and Aaron Ramsdale, have come in at right-back and as first choice in goal.

It has helped having Thomas Partey back from injury in midfield, and he stuck with using Pierre-Emerick Aubameyang to lead the attack, but he has also made tweaks like taking Nicolas Pepe out of the side and putting Bukayo Saka on the right wing.

They have all been really good decisions and it seems as if the manager has got his finger on the pulse with what his best system is, and also the best personnel to play it.

There was a risk that Arteta's approach was becoming too complicated, but I think he has simplified it and the players have responded to that.

Now, after four successive wins in all competitions, the mood at the club feels totally different to the way it was just a few weeks ago. The next step, of course, is to keep this going.

Their next game is Brighton away, next weekend. The Seagulls will be top of the league by then if they beat Crystal Palace on Monday night, so Arsenal cannot let their standards drop if they are going to continue this run.

This is a new team, and a young team, so we don't know what will happen next but I like what I see from these players, and how they are playing together.

What was interesting on Sunday was the way they took charge of the game right from the off. There were quite a few Arsenal players who had not played in a north London derby before but I was impressed by the way they, collectively, looked so hungry.

The desire they showed to go after the game, and really tear into Tottenham, meant it was probably as good a first half as we have seen from Arteta's Arsenal.

They have had spells in various games before where they have been very good, but they have not started as strongly as that - and on such a big occasion too.

I am always happy when we've got players from the academy in the first team because they carry a dream to play in games like this, and to score goals in them.

Two of our brightest young talents, Emile Smith Rowe and Saka, not only did that, they completely ran the show.

Arteta deserves some credit for that, because he used them in the right positions, on the left and right wing. It was just one part of how he really made the best use of his squad for this game.

There is still so much work to do - Arsenal are just rebuilding their reputation at the moment, no more than that - but days like this could prove to be big moments in that process.