Rangers' Jack Simpson will not be able to fill in for Connor Goldson or Filip Helander if they are unavailable to face Lyon on Thursday, as the former Bournemouth defender is not in the club's Europa League squad. Simpson replaced injured Helander in Saturday's win at St Johnstone while Goldson was self isolating. (Sun)

Ex-Rangers player Derek McInnes expects Lyon's former Celtic striker Moussa Dembele to be desperate to get one over on the Ibrox side. (Record)

Manager Ange Postecoglou "was surprised as anyone" over Dominic McKay's resignation as Celtic chief executive. (Sun) 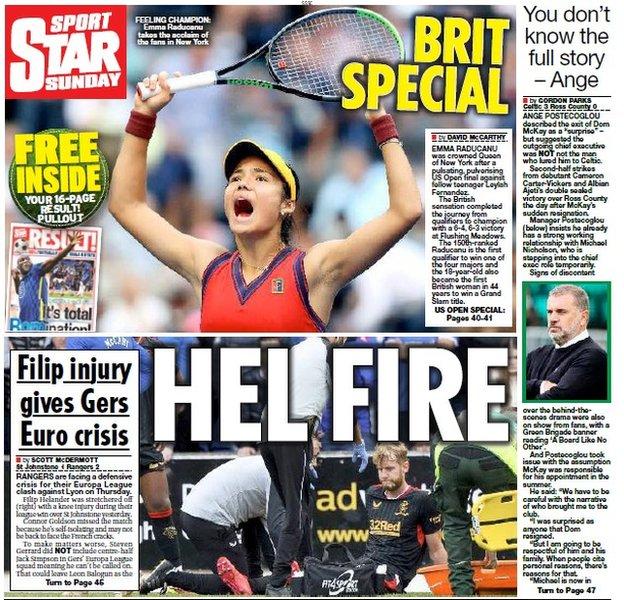 Postecoglou hints it was not any one man who brought him to Celtic amid the fallout from McKay's sudden departure. (Record)

Celtic forward Albian Ajeti says, "I don't need to prove anything to anyone", after bagging a double in Saturday's 3-0 win against Ross County. (Sun)

Joe Hart paid tribute to former Celtic goalkeeper John Thomson 90 years after his tragic passing by wearing a one-off kit during the warm-up of Saturday's defeat of County. (Record)

Hibernian defender Paul McGinn says his late Scotland call-up for Tuesday's win in Austria was "surreal" as he revealed brother John has been calling for him to be in the squad in recent years. (Scotsman - subscription required)

Aberdeen "will get it right", says manager Stephen Glass after watching his side go six games without a win in Saturday's loss to Motherwell. (Evening Express - subscription required)

Dundee manager James McPake could have risked Paul McMullan against Livingston on Saturday but wanted to make sure he was available for next weekend's derby with Dundee United. (Courier - subscription required)