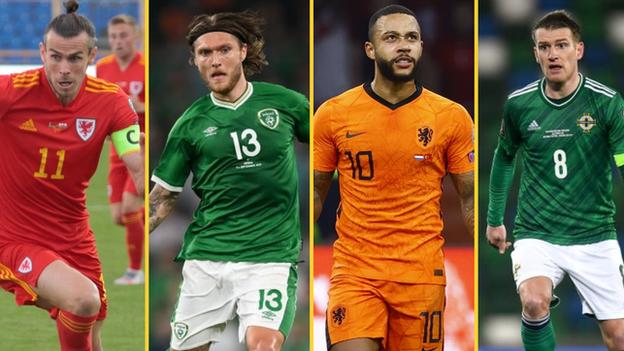 European teams are reaching the business end of World Cup qualifying as the penultimate block of fixtures to reach Qatar 2022 begins.

Games will be played between 8 and 12 October - with the final qualifiers to be played in mid-November.

Italy, Belgium, France and Spain will not be in qualifying action though, as they played the delayed Nations League finals in Italy earlier this week.

Fifty-five member associations are hoping to progress from their qualifying groups, with some closer than others.

England saw their 100% record ended in the last round of fixtures but Denmark have maintained theirs after six games, while Armenia are one of the surprise packages so far, sitting second in Group J, behind Germany.

How are the other home nations doing? And who else is looking set to qualify? BBC Sport takes a look at the state of play in each of the 10 groups.

How many nations qualify?

There will be 13 teams from Europe at next year's World Cup.

The top teams in each group qualify automatically for Qatar 2022, with a further three places up for grabs through a play-off system.

The 10 group runners-up will be joined by the two highest-ranked teams from the Nations League who have not already qualified or finished second in a group.

Those 12 teams will take part in a play-off of two knockout rounds to decide the three additional teams.

How the groups look 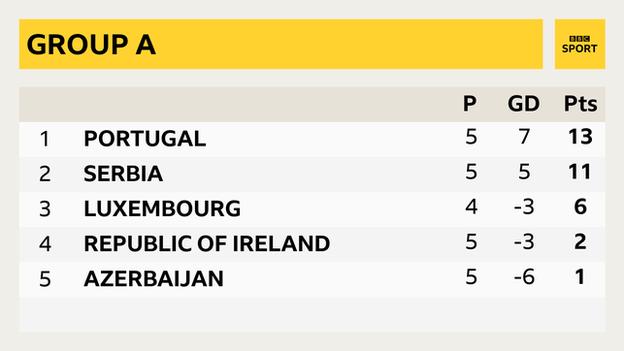 Portugal are top of the standings and the only team in Group A yet to taste defeat. They could qualify for Qatar this month if several results go their way.

Serbia have the chance to go top during this international break because they play twice and Portugal only have one qualifier.

The Republic of Ireland need a miracle to reach the play-offs. 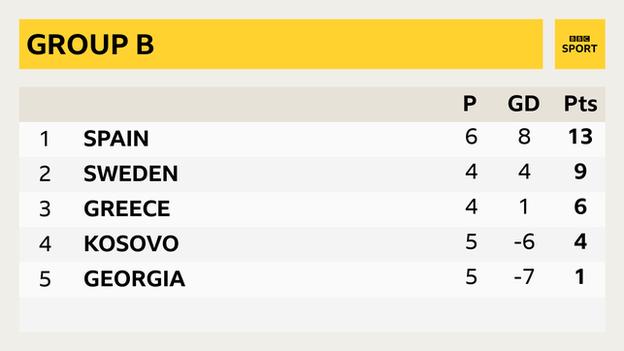 Spain are top of Group B with 13 points from their six games, although they have played two more games than Sweden and Greece, who are second and third respectively.

Nothing can be settled in these fixtures, with Spain not in action. 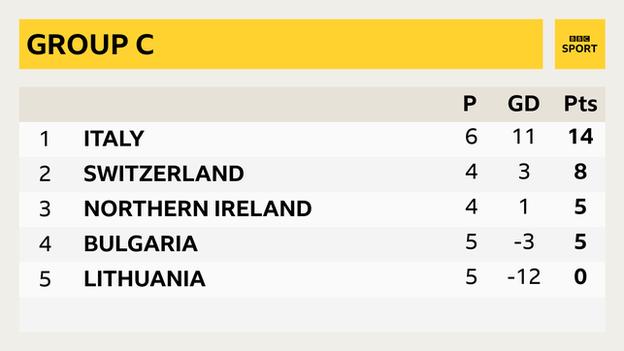 Euro 2020 champions Italy have continued their excellent form and unsurprisingly lead the way in Group C - although they do not have any qualifiers this month.

Switzerland and Northern Ireland have got two games in hand on the Azzurri and are still in contention. 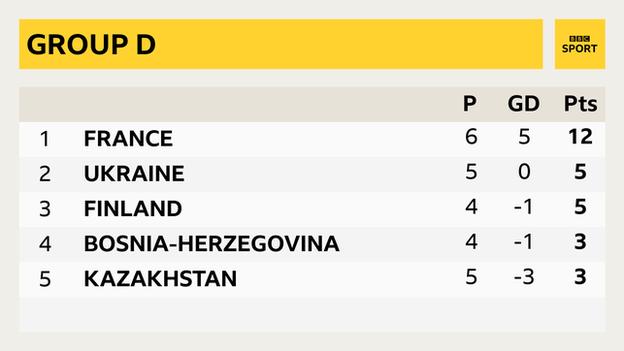 World champions France have stuttered a bit so far but are still top of the group, although they do not play this month.

Finland host Ukraine on Saturday which could be a big game in the bid to put pressure on Les Bleus. 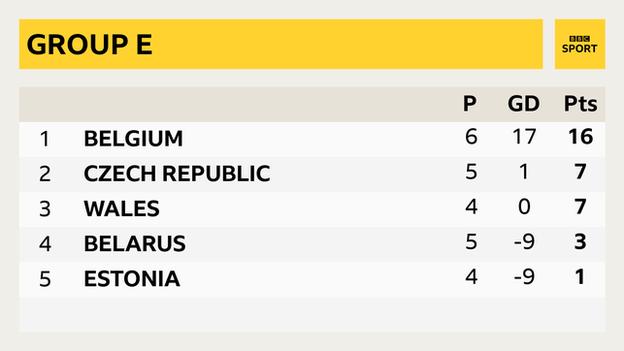 Belgium - who do not play this month - are well on their way to winning Group E with five wins and a draw from six games.

They will be confirmed in the top two on Friday if the Czech Republic do not beat Wales.

Wales play the Czechs and Estonia and could end this break in the play-off spot. 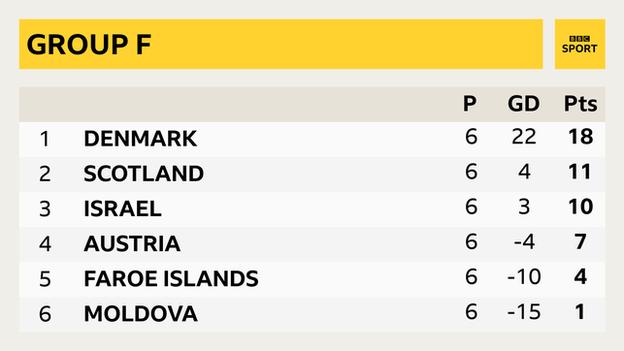 Denmark just need two more wins to qualify. A win over Moldova on Saturday would clinch at least a play-off place.

Scotland play Israel - in a huge game in the race for second place - and the Faroe Islands this month. 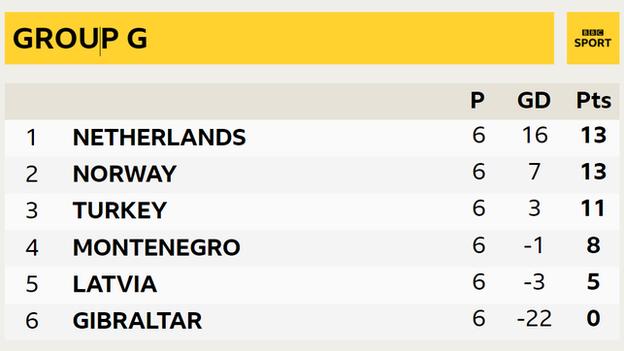 It is tight at the top of Group G with both the Netherlands and Norway on 13 points after six games, and Turkey only two points behind.

The Dutch play the bottom two teams this month, while Turkey host Norway on Saturday 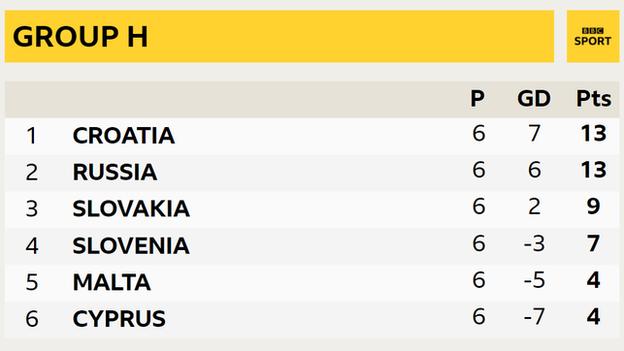 It is down to goal difference in Group H also with Croatia and Russia both on 13 points.

Things could become clearer this month with Russia and Croatia both hosting third-placed Slovakia, who are still in contention. 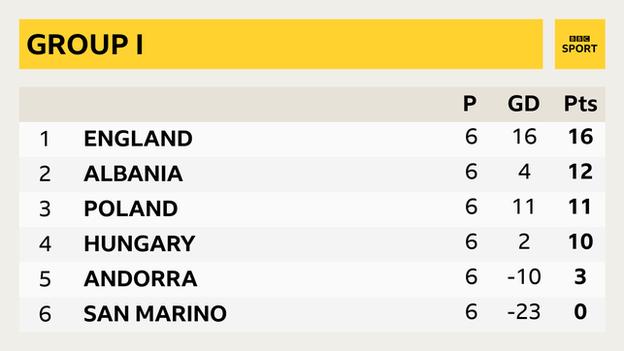 England play Andorra and Hungary this month as they look to move closer to a World Cup spot.

Albania, Poland and Hungary are probably battling for second spot. Albania play both those sides this month. 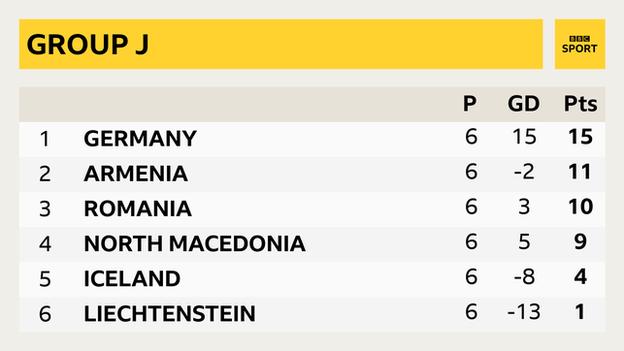 Hansi Flick's side play Romania and the Macedonians this month.