"He needed about three or four chances to score. He wasn't a great striker of the ball. They were like golf shots."

Martin Boyle has come a long way since swiping his foot like a nine-iron while a teenager at Montrose, with the Hibernian forward having scored eight goals in 11 games for club and country this season, despite drawing a rare blank in Sunday's goalless Edinburgh derby.

BBC Scotland finds out how the 28-year-old has gone from being a teenage delivery driver and part-time footballer, to eyeing up a World Cup place with Australia as one of the Scottish Premiership's top attackers.

Catching pigeons and a missing £25

Under the guidance of former Hibs defender Steven Tweed, Aberdeen-born Boyle started out at fourth-tier Montrose as a less "chirpy" version of his current self.

While studying at college and helping his mum out delivering parcels, a "very raw" but rapid 16-year-old Boyle was handed his debut as a substitute at, of all places, Easter Road.

Despite the Scottish Cup tie ending in a 5-1 defeat for Montrose, Boyle was looking forward to receiving some much-needed appearance fee for his four-minute cameo.

The Hibs man is adamant he is yet to see the £25 from Tweed, but his first boss believes he is entitled to a wad of compensation from Boyle due to the part he has played in his career. "He still owes me about 10% of all the money he's made," he says.

A brief appearance from the bench in Leith would prove to be Boyle's only minutes in the 2009-10 campaign.

But after work on the training ground trying to get the youngster to channel his pace in the right way, Boyle was afforded far more game time the following season - scoring four goals in 28 appearances.

"He was running offside all the time," Tweed recalls. "So we were trying to coach him to arch his runs. Boyley's only real attribute then was his pace - he could catch pigeons. His end result wasn't always the best, but it kept getting better."

Boyle's development progressed to another level in 2011-12, as the pacey forward played every minute of Montrose's fourth division campaign under former Dundee defender Ray Farningham - netting an impressive 22 goals.

Farningham departed at the end of the season to become Barry Smith's assistant at Dens Park and an in-demand Boyle followed, jumping from the bottom tier to the top flight, but things failed to work out on Tayside.

Boyle would spend the second half of the 2012-13 season back at Montrose on loan, before failing to cement a regular first-team spot in his final 18 months at Dundee.

The forward's situation alerted then second-tier Hibs, who signed him on a six-month loan deal which saw Alex Harris - now of Berwick Rangers - move in the other direction.

"It was the right time for Martin to have a fresh challenge and it was a good time for us," former Hibs manager Alan Stubbs tells BBC Scotland. "He didn't have a great time at Dundee but pace was something we were looking for.

"Even though he didn't necessarily play a lot at the beginning, it was about Martin starting to believe in himself again."

Boyle gained a new lease of life at Easter Road, but his season was brought to a cruel end when he suffered a serious medial ligament injury.

The Hibs man was due to become a free agent that summer and feared he would have to go back to delivering parcels again, but Stubbs had seen more than enough to offer a two-year deal - a decision Boyle views as career-defining.

"With having such good people at the club, they understood the circumstances," Stubbs says. "You didn't have any doubts about Martin coming back and that's why we didn't have a problem.

"At the time, Martin was going through a difficult period and that's when he needed people around him most. We were always there. All we did was play another small part in his career."

While Boyle's performances were ever-improving on the pitch, he was also good form off it. In his first full season at Easter Road, he was part of the Hibs squad that ended a 114-year wait to win the Scottish Cup.

Former team-mate Marvin Bartley told Open Goal how he picked up a worse-for-wear Boyle from a doorway wearing a pair of "stolen sunglasses" and "a tie round his head" in the aftermath of the final and dragged him to a player awards evening.

"I remember him turning up and let's just say it's a good thing sunglasses exist," Stubbs recalls. "I think he was going for about three or four days after. He certainly enjoyed it, which he had every right to." 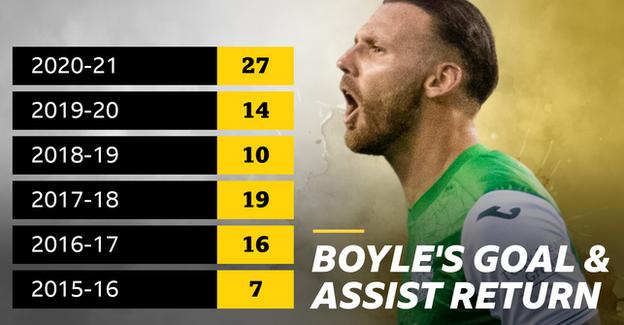 'As good as anyone in Scotland'

Following Stubbs' departure in June 2016, Boyle enjoyed further success as Neil Lennon's side gained promotion before finishing fourth in their first season back in the top flight.

Lennon resigned in early 2019 and was replaced by Paul Heckingbottom, but Boyle's minutes were hampered as he suffered two worrying knee injuries that ruled him out for the majority of the year.

His return would coincide with the appointment of Jack Ross, who has elevated the 28-year-old's game further.

"It's not just about his pace now," Stubbs says. "What Martin didn't do enough in the past was capitalise on the chances he created for himself, but now he's channelling his pace in the right way and he's become much more of an all-round player."

The Australia international scored 15 goals and registered 12 assists last term as Hibs finished in third, sparking speculation about his future.

Aberdeen had a £500,000 bid turned down, but Boyle almost immediately signed an extension at the club he and his wife Rachael - who plays for Hibs women - represent just days later, and Ross believes there are few better forwards in the country.

"Last season, his numbers for goals and assists were outstanding," the manager said. "He's started exactly the same this season as well. You can tell he's feeling good and he's right at it.

"For me, he's as good as anyone in this country in his position, and long may it continue because he's a major asset for us."