Burnley and Watford are going head-to-head in the race to sign 19-year-old Hibernian left-back Josh Doig, who is valued at £4m and was left out of the Edinburgh club's win over Motherwell in Sunday's Scottish Premiership opener. (Daily Mail)

Burnley are in pole position to sign Josh Doig, but Watford are not prepared to give up without a fight in their pursuit of Hibernian's 19-year-old left-back. (Edinburgh Evening News)

Celtic are exploring a deal for Republic of Ireland midfielder James McCarthy, with the Glasgow-born 30-year-old a free agent after leaving Crystal Palace this summer. (Daily Mail)

Celtic have been told that the prospect of signing Cameron Carter-Vickers on loan is a non-starter as the 23-year-old United States centre-half wants a permanent move from Tottenham Hotspur. (Daily Record)

Despite reports in Belgium suggesting a transfer to Celtic for Aurelio Buta had been agreed with Royal Antwerp, it looks like a deal could be some way off and that the Scottish Premiership club face competition from Turkish clubs Galatasaray and Fenerbahce for the 24-year-old right-back. (Daily Record)

Olivier Ntcham has paid tribute to Celtic's staff, players and fans as the Glasgow club announced that the 25-year-old French midfielder had left them after his "contract came to an end". (The Herald)

Rangers striker Alfredo Morelos, who has been on an extended summer break following the Copa America with Colombia and amid speculation linking him with a move to Porto, has posted a photo on social media of his return to his home in Scotland that suggests the 25-year-old has ended the hotel quarantine required by Covid-19 restrictions. (Daily Record)

Hearts midfielder Loic Damour has left Tynecastle Park and returned to France to sign a deal with Le Mans after the Scottish Premiershp club accepted an offer that will result in the 30-year-old spending this season on loan in the Championnat National. (Edinburgh Evening News)

St Johnstone are "working hard behind the scenes" to conclude the transfer of 22-year-old striker Eetu Vertainen from Ilves Tampere. (The Courier) 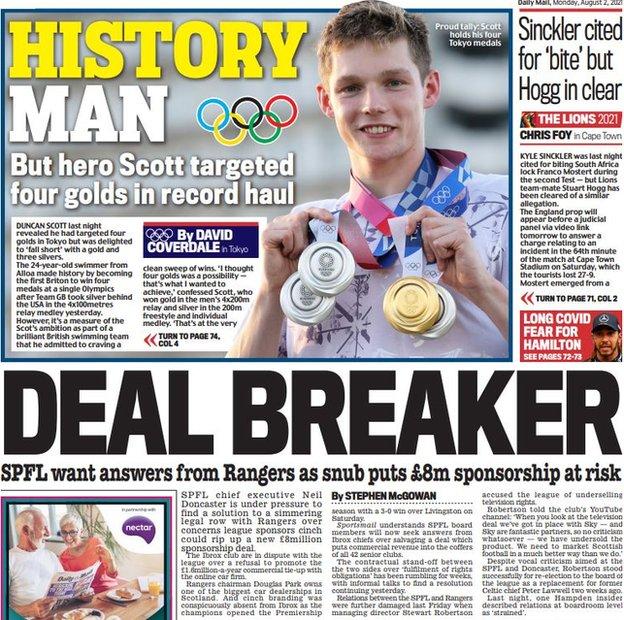