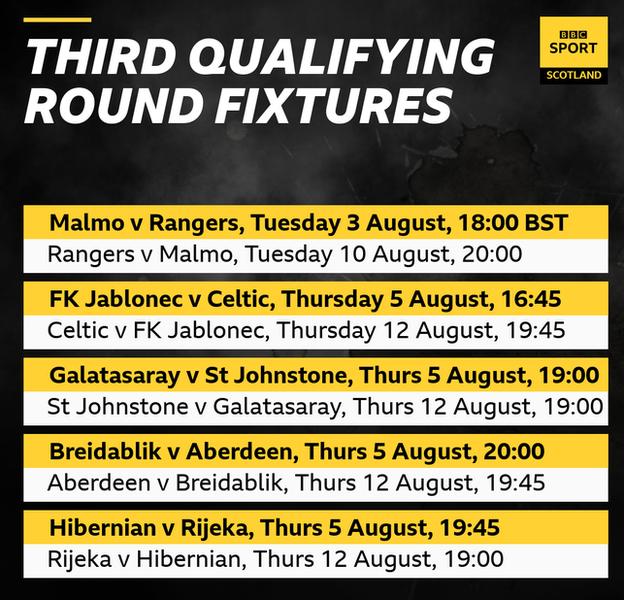 Not since 2012-13 has Scotland started a season with five clubs in Europe. And three will still be alive come the play-off rounds regardless of what happens over the next couple of weeks.

Before the quintet kick a ball in anger this week, they'll know what awaits them with the draw for the final hurdle before the group stage taking place on Monday.

Aberdeen could be pitched into a mouth-watering tie against Tottenham. St Johnstone might be eyeing a trip to France. While Rangers, Celtic and Hibernian will all be hoping to avoid arduous journeys to Kazakhstan.

Whatever happens, Rangers will be in Europe until at least December. Even if they fail to reach the Champions League group stage, they have the safety net of the Europa League, then the Europa Conference League.

Plan A is to be among Europe's elite. They must first get past Malmo - with the first leg on Tuesday - and the Swedish champions have a history of doing well against Scottish opposition in the past decade.

Should Steven Gerrard's side progress as expected, though, they will be unseeded for the play-off round.

Austria's FC Salzburg look like the most imposing seeded side, while Rangers could also face a rematch with Slavia Prague, who knocked them out of the Europa League last season. First, the Czechs would have to see off Hungary's Ferencvaros, who beat Celtic in a one-off tie in last season's qualifiers.

Plan B for Rangers will be the Europa League. Lose to Malmo, and they would be ranked as a priority two team, and this is where it gets complicated.

Half of the six group one teams will first be drawn against the group four teams. So, if Celtic beat Jablonec of the Czech Republic and St Johnstone get past Turkey's Galatasaray, their opponents will be from that list.

After three teams from group three are paired with the final trio of group one teams, that leaves two remaining in that pot. Rangers could face one of those, or a team from their own priority group two. Still with us?

There is a possibility all five teams could end up in this competition. For now, only Aberdeen and Hibernian would want to remain in it.

Stephen Glass must navigate his side past Iceland's Breidablik in the third qualifying round to reach the play-offs. Do that, and Tottenham will be one of four potential opponents.

While that would be the toughest tie, the others are tricky but potentially winnable. The one Glass would likely covet is Wales' The New Saints, who first need to get past Czech side Viktoria Plzen.

Hibs, should they prevail against Croatia's Rijeka, could face a trip to take on Astana should the Kazakhstan club beat Finland's KuPS. But Jack Ross may prefer a jaunt to Dublin to take on Bohemians if the Irish side can see off Greece's PAOK. There is also the possibility of meeting former European Cup winners Feyenoord.

Celtic and St Johnstone are also in the draw, with defeat in their Europa League ties dropping them into the Conference League play-off round.

Celtic would be seeded. The toughest opponents look like being Rapid Vienna of Austria, Portugal's Santa Clara, or Turkish pair Sivasspor and Trabzonspor.

St Johnstone, like Aberdeen and Hibs, would be unseeded. They could take on France's Stade Rennais or Belgium's Anderlecht for a place in the groups.