Celtic have been told they will have to pay a £1m transfer fee for Joe Hart despite the 34-year-old goalkeeper being told he is not in new Tottenham Hotspur manager Nuno Espirito Santo's plans this season, but the Premier League club are open to cutting a deal for the final year of his contract, worth £2.5m. (Daily Record)

Watford will make a move for St Mirren's 24-year Republic of Ireland midfielder, James McGrath, if they fail in their efforts to sign 21-year-old Lewis Ferguson from Aberdeen. (The Sun)

Rangers have handed Charlie McCann a three-year contract to persuade the 19-year-old midfielder to quit Manchester United and the Irishman has arrived in Glasgow for talks and a medical. (Daily Record)

Carl Starfelt says he is ready to make a quickfire debut for Celtic against Hearts this weekend now that the 26-year-old Swedish centre-half's quarantine period has ended following his transfer from Rubin Kazan. (Daily Record)

Former Celtic manager Neil Lennon thinks the Glasgow club's summer signing problems, which have been blamed for their Champions League qualifying defeat by Midtjylland, was partly down to the void left by the departure, soon after his own, of talent spotting head of football operations Nick Hammond. (The Herald)

Rangers are on course to leapfrog Celtic in the Uefa co-efficient rankings after their city rivals' Champions League exit to Midtjylland, with the Ibrox club finishing last season in 52nd place, only six places behind. (Scottish Sun)

St Johnstone manager Callum Davidson says that, despite last season's fifth-place finish and lifting both the Scottish Cup and League Cup, avoiding relegation from the Scottish Premiership is still his priority in the current season. (The National) 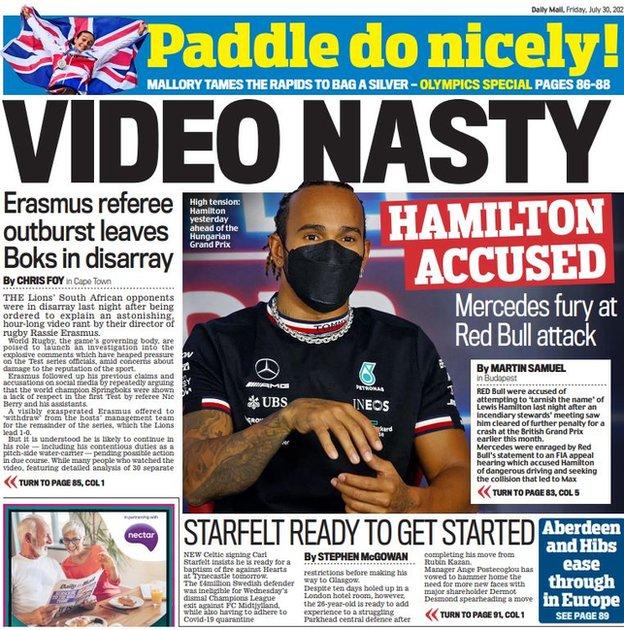