Last season's runners-up Livingston needed a bonus point on penalties to keep their last-16 hopes alive after being held at home by Raith Rovers.

Dundee are all but through after seeing off hosts Montrose 2-0 for a third victory out of three.

Ross County belatedly kicked off their season with a 1-0 win at Brora Rangers.

Falkirk forfeited their Group E tie at Edinburgh City after a Covid-19 outbreak left the visitors unable to field a team.

In Group F, Motherwell had won their opening two ties but were stunned by Ian Murray's Airdrie in the sides' first meeting for 14 years.

It leaves both sides with one game to play while trailing a point behind leaders Queen's Park, who have completed their fixtures.

Livingston salvaged what could be a crucial bonus point as they triumphed 6-5 on penalties against second-tier Raith, who stay top of Group D.

Livingston are three points adrift in third and must beat Cowdenbeath on Saturday to have a chance of progressing.

Dundee went top of Group C with Jason Cummings opening the scoring after the break with a penalty before fellow substitute Luke McCowan sealed victory at Montrose.

Ross County are out of contention for the knockout stage after forfeiting their opening two games following a Covid-19 outbreak. They finally got their season up and running with Alex Iacovitti's header edging out Highland League Brora. 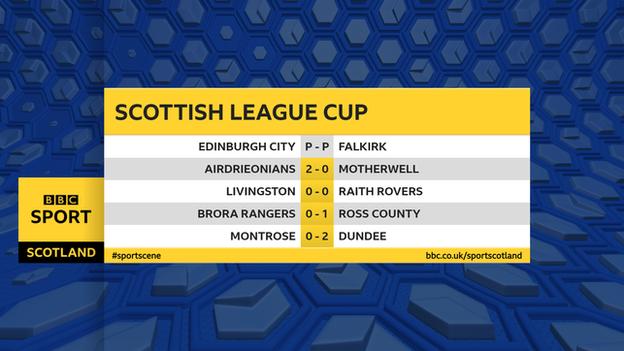