New signing Liel Abada, 19, impressed and opened the scoring for the hosts before being replaced on 45 minutes by fellow debutant Murray.

Nir Bitton's first-half dismissal prompted the entrance of the 18-year-old defender, who shone alongside 21-year-old Welsh.

Despite failing to see out the victory, Postecoglou's competitive introduction was fuelled with flair from his young talent - but how did they do it?

There would have been a collective dread around the east end of Glasgow when Celtic fans fixed their eyes on Postecoglou's defensive line-up for the visit of their Danish opponents.

While Greg Taylor is a more than dependable Scottish Premiership left-back, few would have batted an eyelid if the trio alongside him - Welsh, Bitton and Anthony Ralston - were never seen in green and white again after last term ended.

Bitton, an experienced campaigner, left the pitch red-faced after an idiotic second bookable offence with his side 1-0 up.

"It's disappointing for him," Postecoglou said afterwards, choosing not to criticise the Israeli. "He is probably the most disappointed out of anyone as I know how much he wanted to contribute.

"The important thing for me was the reaction from the players. I thought the two young centre-halves Dane [Murray] and [Stephen] Welsh, in a Champions League fixture, were outstanding."

Welsh - on just his fourth European appearance - led Celtic's backline through a frantic encounter. Not only was former Morton loanee dependable in defence, but he also played a vital role in building attacks.

The 21-year-old had the most touches, passes and highest passing accuracy on the pitch, and stood tall alongside Murray who also impressed on his first ever competitive appearance - making the joint-most clearances (three) out of anyone on the pitch in just 45 minutes. 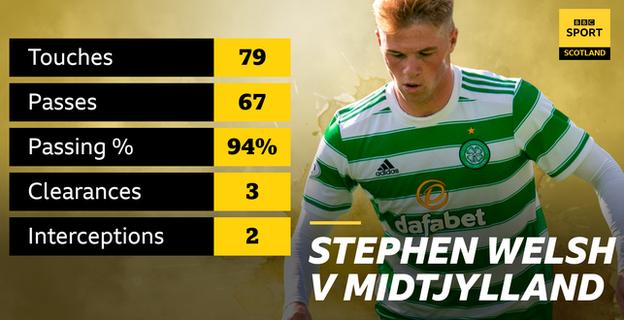 Not Abada for your first start

Abada - who was only signed last Thursday - wasn't in Postecoglou's initial squad for Tuesday's game.

But the manager sprung a surprise by including the Israeli winger in his starting line-up, and it proved to be a shrewd decision.

Despite being substituted just before the break, Abada netted the opening goal in a lively showing which also saw him make three key passes.

"He has literally had two or three sessions with us," Postecoglou said. "He is just in the infancy of his Celtic career, but he showed really good, intelligent movement and he was in the right area for the goal."

'Murray has great career ahead' - reaction

Dane [Murray] is good in the air and on the ball too. He's young so he will make mistakes but it's about how he bounces back from them. He's got a great career ahead of him.

I think everyone's trying to push to be in the starting XI and we all want quality players to come in too.

With the chances we created, we could have scored four or five, especially in the first half. We looked like a real threat so we're going over there with a real confidence to win the game.