England and Atletico Madrid full-back Kieran Trippier is desperate for a return to the Premier League as the 30-year-old waits on a Manchester United move. (Telegraph - subscription needed)

Everton have made an opening bid for Napoli and Senegal centre-back Kalidou Koulibaly, 30, who is said to be one of new manager Rafa Benitez's top targets. (Calciomercato)

The Reds may include one of Divock Origi or Xherdan Shaqiri in a deal to bring Atletico Madrid's Saul Niguez to Anfield. (Daily Express)

West Ham are close to agreeing a loan deal, with an option to buy, for French Paris St-Germain goalkeeper Alphonse Areola, 28. (Evening Standard)

Arsenal defender Hector Bellerin has yet to agree personal terms with Inter Milan but the Italian side are considered favourites to sign the 26-year-old Spaniard. (Football.london)

Meanwhile Gunners midfielder Joe Willock, 21, has reportedly told the club he would prefer to rejoin Newcastle on loan for the new Premier League season. (Daily Express)

But Arsenal manager Mikel Arteta says Emile Smith Rowe will not be sold this summer despite reported interest from Aston Villa. (HITC)

Leicester City have offered Belgium international Youri Tielemans, 24, a new long-term contract and are confident the midfielder will stay at the club, despite interest from Liverpool. (Telegraph - subscription needed)

Meanwhile, Liverpool goalkeeper Alisson is close to signing a new deal at the club. (HITC via Here We Go Podcast)

Tottenham are one of four Premier League clubs interested in signing American Schalke forward Matthew Hoppe, 20, who scored six goals for the German side in the Bundesliga last season. (The Boot Room)

Defender Brandon Williams, 20, could see his loan move to Southampton in jeopardy due to Manchester United's financial demands. (talkSPORT)

Arsenal are set to miss out on signing PSV Eindhoven and the Netherlands forward Donyell Malen, 22, after he reached an agreement to join Borussia Dortmund as a replacement for Jadon Sancho. (Just Arsenal via Sports Bild)

Tottenham are closing in on the signing of Bologna and Japan defender Takehiro Tomiyasu, 22, with the fee expected to be in the region of £15m plus add-ons. (The Athletic - subscription needed)

Newcastle target Boubacar Kamara, 21, has turned down a new contract with French side Marseille. The Magpies would look to bring the France U21s midfielder to St James' Park for around £15m. (HITC via Alfredo Pedulla)

Leeds United face competition from an unnamed Premier League team, plus a side from La Liga in Spain, to sign goalkeeper Kristoffer Klaesson, 20, from Norwegian side Valerenga. (Mirror) 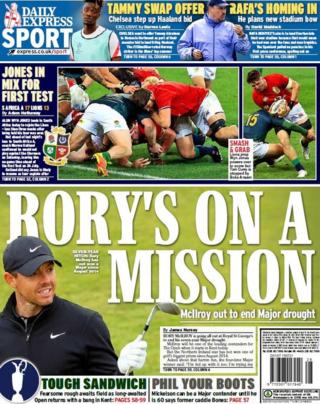